For all their dizzying riches, most stories about the mob end badly for everyone involved. They're tragedies in the classical sense, where great but flawed characters pursue their goals with ambition and cunning until they are finally laid low by fate. We admire these figures for their highs, but remember them at their lowest: Tony Montana, drug-addled, lashing out like a dying animal; Michael Corleone, hardened by betrayal into a vicious tyrant; Henry Hill, forced into hiding, living the rest of his life like a schnook. 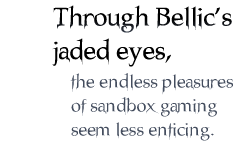 This tragedy does not always find its way into the games inspired by these stories. There is an essential paradox of design: If games are ultimately about freedom and victory, how can they tell tales of epic failure? Most stop at the halfway point of these iconic stories, letting players embrace the vicarious pleasures of the mob life without the vicious crash that accompanies it. But Grand Theft Auto 4 sees it through to the bitter end. It's the Rise and Fall of the House of Bellic.

It's easy to misunderstand the settings of most sandbox games as devoid of drama or consequence. Your entire world is comprised of options, most of them criminal. Do you feel like stealing a car, flipping it and blowing it up? Maybe climbing a tower with a sniper rifle and popping people's heads like cherry tomatoes? Knock yourself out - in Grand Theft Auto, no misbehavior is so grievous that it can't be washed away after a quick trip to the police station or the hospital. That conceit works well for gameplay, but it hinders the narrative by suggesting a world in which even the gravest actions have no meaning. How could we buy Lady Macbeth's "Out, damn'd spot! Out, I say!" if she could have just headed to the nearest Pay'n'Spray?

In most games of the series, this carnage is endorsed by a protagonist willing to "play the game" and cash in on this chaotic life of crime. Grand Theft Auto 3's speechless Claude is your standard videogame cipher, willing to do any mission without complaint or comment. Vice City's Tommy Vercetti is ruthless and unforgiving, willing to do anything it takes to be the biggest and the best. Even San Andreas' CJ, though troubled by his mother's death, quickly finds his way back to the petty gang squabbles of thug life. Though their positions and philosophies are quite different, all these men want in. But Niko Bellic wants out.

It's not that he's sick of violence. It's that he's bored to death by it. A lifetime in war-torn Europe has left Bellic cynical and mercenary. For him, crime is neither about personal gain nor vicarious pleasure; it is simply a job that he can do, and do well. Through Bellic's jaded eyes, the endless pleasures of sandbox gaming seem less enticing. Yes, he's willing to torch a few cars and crack a few skulls, but only if someone is paying, and only if the price is right. As for the gangster's dream of girls, glitz and glamour, he quickly sees it for what it is: a fleeting illusion to be grasped at by any wretch with a gun. Bellic wants none of these things. He wants a steady job, a home, a family. But before all that, he wants revenge.

Miracle of Sound: Niko It's Your Cousin! (GTA IV) MiracleOfSound 37 Comments
Comments on