From the early days of chasing after giant girlfriend-kidnapping gorillas to dropping from an orbital ship to battle aliens, videogames have typically been far more interested in fantasy than accuracy. After all, how much fun would it really be to spend an hour as Master Chief fighting aliens and then the next three field-stripping your weapons and filling out paperwork? But few subject matters are so disproportionately portrayed in videogames and popular culture as the Mafia. If games are to be believed, each Mob member is a master of every conceivable weapon and able to hot-wire and pilot any vehicle they come across. 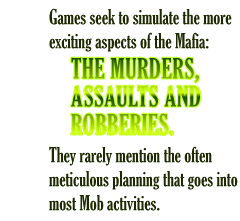 In fairness, trying to accurately portray the day-to-day operations of a criminal organization would likely prove incredibly boring. Considering that a typical "family" involves thousands of associate members, soldiers and captains all running very mundane operations on a daily basis, it would be impossible to simulate even the smallest of operations. Since Grand Spreadsheet Accountant has yet to be made, it's safe to say that the reality of this subject wouldn't appeal to most gamers.

Instead, games seek to simulate the more exciting aspects of the Mafia: the murders, assaults and robberies. They rarely mention the often meticulous planning that goes into most Mob activities. When Gambino family member Salvatore Gravano turned federal witness in 1991, he described in vivid detail how even the most routine murders involved meeting with several of his fellow Mafia officers. When a member of Gravano's own crew, Nicholas "Nicky Cowboy" Mormando, became hooked on crack cocaine and talked about leaving Gravano's crew to start on his own, Gravano still sought permission from his Don, Jon Gotti, before taking Mormando out.

Most games remove the political aspect of Mob life from the gameplay. Instead, they simply tell players where to go and whom to kill. This comes as no surprise - few gamers are interested in running back and forth to advance the plot without running into action of some sort. In an interview with the Chicago Tribune, Dan Houser, Vice President of Creative for Rockstar Games and Lead Writer of Grand Theft Auto IV, talked about the trade-off between story and action: "We're constantly trying to balance the need for narrative and the need for action ... and never slow down the action through having too much exposition." Presumably, adding that layer of authenticity to Mafia-inspired games would hinder players' enjoyment. But could developers be missing the opportunity for new kinds of game mechanics?

While the stereotype of the "dumb thug" mob soldier certainly plays heavily into Mafia games, the role in which most games cast the player is one of the intelligent, calculating individual that is supposed to be smarter than the average soldato. So why doesn't the gameplay ever reflect this intelligence?