Spikes are everywhere, and everyone knows that spikes mean death. They line walls, ceilings, floors and sometimes they just float around for the hell of it. In this particular room, they cover every surface of a passage between two choke-points, a corridor of pain in which a single platform floats back and forth. After what seems like an eternity of futile struggle, the tiny avatar of the Kid manages to land on the platform as half the objects in the room fly at him, narrowly skimming past. A finely timed jump gets the Kid out of the maw of death and onto safe ground. 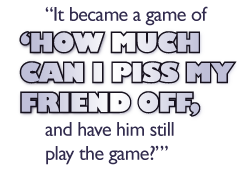 Then a reaching hand drops out of a tree sitting in the background and The Kid explodes in a mass of red pixels for the 20th time in the last two minutes. Rock chords ring out, and "GAME OVER" looms over the top half of the screen, with the words "PRESS 'R' TO TRY AGAIN" spread out underneath them. The player, "OMGEEZY," screams and cries, but records it for the world to see. [NSFW, outburst at 6:30.]

I Wanna Be The Guy creator Mike O'Reilly, better known as Kayin Nasaki, would most likely just laugh at the player's outrageous frustration. O'Reilly says that for him, the game is purely about humor. For others, it is torture. Yet for most diehard fans of the game, it is a weird mixture of both; a rare digital pleasure that manages to entertain with its absurd and often ridiculous cruelty.

The creation of intentionally frustrating platforming adventures is nothing new. Indeed, there is an entire genre of similar games, called "masocore," whose sole purpose is to drive players mad with frustration. But IWBTG has secured a place in players' minds separate from the Mario ROM hacks and Japanese parody games that inspired it.

IWBTG was O'Reilly's pet project after returning to making games around 2007. The initial inspiration came after playing the ASCII flash game Owata. He decided that while Owata was hilariously difficult, it was too short and not as refined as it could have been, so he set out to make something "like that, but better." But the motivation to expand his early experiments into a full game didn't come until he found a test audience, whose reactions were beyond his expectations.

"I gave it to one of my friends to mess with, and he got really angry, but in a funny way, and no matter how angry he got he kept playing," O'Reilly says. "Then it became a game of 'how much can I piss my friend off, and have him still play the game?'"

The answer turned out to be "a lot." IWBTG is huge, consisting of multiple branching paths and a total of eight unbelievably hard bosses. To top things off, every screen is a tangle of death-traps that usually fire off either constantly or at moments when the player is most vulnerable. Still, some people can't be deterred. After Dracula smashes them with a wine glass; after Mike Tyson punches them out; and even after the game, prone to glitching, pretends to encounter a game-breaking error, people keep playing.

Letters to the Editor: My Game Done Me Wrong The Escapist Staff 3 Comments