"I was so used to it crashing that I'd already pushed control-alt-delete to stop it [when the fake error message popped up]," says Tristan Trabilsie, a member of IWBTG's forums. "I played through a second time and it happened again, and I was like, 'What? What is this?' And then I was like, 'Ooooh man!'" 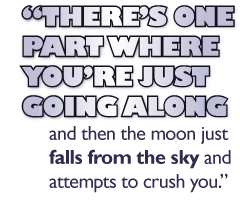 Trabilsie followed his love of IWBTG all the way to its unhinged conclusion: He was the first person to report beating the game on "Impossible" mode on the official IWBTG forums, to mingled skepticism, hatred and astonishment. (In Impossible mode, the player has only one life to complete the entire game.) Moderator "SilentLoner" posted, "You, sir, are insane," to which Trabilsie simply replied, "Yes."

After learning about IWBTG on a game development forum he frequented, Trabilsie discovered the intricate traps laid out by O'Reilly and fell in love. "I think [when I really got into the game] was when I hit the Tetris round, because ... it's one of the most well designed things in the entire game," he said. "The whole thing's just awesome."

In the Tetris area, players drop in from the top of a Tetris board just a little bit faster than an incoming L-block. Each Tetrad is about four times bigger than the Kid, and they fall hard and fast. There's no way to beat the level other than sheer memorization; if you try to just wait out the game without making your way to the high-up escape route, a pill from Dr. Mario drops and destroys everything on the screen.

"I think it's really impressive that people love the game so much that ... there was enough people to really sit down and break it down like they would an old NES game," O'Reilly says. "It also makes me wonder, because ... the game is very, um, 'mind-f**k oriented,' so when you take that out on your 10th, 20th, 30th time through the game, I really don't know how the platforming challenges remain interesting."

To O'Reilly, "the real value of the game is just how it messes with your head. ... [It's about] really getting into someone's head, and making everything that they do an act of paranoia."

Fans seem to agree. "There was kind of a sick humor to it, the fact that he was using things like fruit to kill you," says Corey Farris, who was the 111th person to officially report beating the game. "There's one part where you're just going along and then the moon just falls from the sky and attempts to crush you." Other likely murder weapons are rocket-propelled spikes, badly drawn mosquitoes and lightning bolts. Everything in the game is instantly fatal to the Kid.

Letters to the Editor: My Game Done Me Wrong The Escapist Staff 3 Comments
Comments on