There's also an element of nostalgia to players' enjoyment of IWBTG. For Farris, the appearance of spin-kicking Ryu and even the dragon boss from Mega Man 2 were great incentives to keep playing. "In one of the paths, the Mecha Birdo path, the music and the zombies and everything reminded me of Super Ghouls 'n Ghosts, which is one of the games I played a lot of as a kid," Farris said. "It's always fun to have a nostalgic throwback like that." 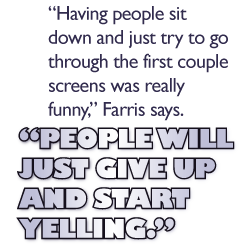 The throwbacks were partly inspired by Owata, which featured an ASCII Guile from Street Fighter and the sound effects from 8-bit Mega Man, among other things. In IWBTG, they're apparent right from the game's intro, which mimics the sounds and sights of Mega Man 2. Bosses are all parodies (or duplications) of classic characters like Kraid or Mother Brain from Super Metroid, and many levels serve as tributes to games like Castlevania, where the series-trademark Medusa Heads float by as incessantly as ever. Still, every trope and trap, borrowed or new, is designed to test the player's patience and platforming skills.

"Having people sit down and just try to go through the first couple screens, and watching them fail over and over and over again was really funny," Farris says. "People will just give up and start yelling."

Players' reactions have proven to be one of the most endearing features of the game. Dozens of "Let's Play"-style videos and walkthroughs populate YouTube. Players and non-players alike can delight in the horrible frustrations suffered by legions of people who just want to see that next screen or reach that next save point.

"I know one of the first LPers ["Let's Play" makers] punched a hole in his wall over the game," O'Reilly says, chuckling evilly. "I was talking to him at the time over IM, 'cuz I thought his 'Let's Play' was really funny and we became friends, and then he just IM's me and it's like, 'I just punched a hole in my wall because of you. I don't hold it against you but I just want you to know this.'"

O'Reilly seems to have found the perfect balance of absurdity and playability with IWBTG. The official tally of people who have beaten the game is 450 as of Nov. 21, 2009, and that number continues to climb more than two years after O'Reilly unleashed his creation upon the world. Its comedy and difficulty have earned it a place in gaming history - quite a feat for an independent, freely distributed title.

"It's a pretty unique game not only [in that] it seems like a mash up of a bunch of other things, but the difficulty and the humor in it," Farris says. "There's really nothing else like it."

Richard Poskozim is a freelance contributor to The Escapist. Although he enjoys watching people suffer at the hands of digital entertainment, he has not and will not ever conquer IWBTG on anything harder than Medium.

Letters to the Editor: My Game Done Me Wrong The Escapist Staff 3 Comments