As a younger man I was a humbug. I hated Christmas and found plenty of excuses to participate in it as little as was practicable. I enjoyed the food and the excellent beers, of course, but everything else left me cold. The bad television, the armies of visiting relatives, the unwanted exchange of poorly conceived presents - it seemed like the worst possible mix of commercialism and boring, cheek-pinching aunts. Over the years I had developed a fairly broad range of techniques to escape excess Christmas responsibilities, and I'd usually trudge off to a bar with friends or escape to a PlayStation-equipped backroom at the earliest opportunity. 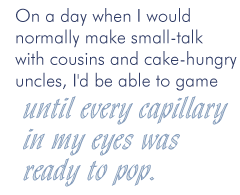 But around December of 2006, I found myself in a dream scenario for Christmas humbugging: My live-in girlfriend, who was employed as a hotel manager, would be working through most of the holiday. I was going to be able to stay home, skip the whole thing and play videogames through the entire Christmas period. I could scarcely imagine anything more splendid, and I looked forward to it with acute anticipation, counting the hours as the busy pre-Christmas weeks ticked by. Imagine it: Glorious solitude on a day when I was normally making small-talk with cousins and cake-hungry uncles. I'd be able to game until every capillary in my eyes was ready to pop.

Finally the day came, and my exhausted girlfriend was dressed, fed and packed off to work before the sun had even come up. Coffee would be her Christmas, and I would put on some woolly clothes and check myself in for a spectacular marathon of self-indulgence.

Sadly, this early rising had left me with that peculiar poorly calibrated feeling of not-much-sleep, and without the usual energy of Christmas, there was little to keep me awake. There was no feverish opening of presents, no fussing parents, no unwarranted excitement from smaller siblings. As I returned to the empty house, my heart began to sink. I was actually going to miss my girlfriend and her efforts to drag me away from the dancing polygons on whatever screen was at hand. I realized that my humbug was, in fact, a farce. The truth was that I'd long outgrown my sullen teenager-dom, and I'd actually (albeit unconsciously) come to love my family Christmases.

This carefully orchestrated day of lonesome gaming was not what I wanted at all.

As I quietly made myself an uninteresting breakfast, I grew more despondent. I was going to be alone until late that night, on Christmas Day, with nothing to do and no one to talk to. Even when the girlfriend returned from her far-flung employment, she'd be going straight to sleep. My day of gaming bliss was quickly becoming a disaster.