Visiting stores, I saw other machines besides clones, but these were black-market imports of legitimate hardware and cost a lot more South African Rand than a counterfeit Famicom. By the time these machines passed through so many middleman to finally reach the stores, the price would be quite high. At one point, I recall that an imported American SNES cost, taking into account the exchange rate back then, over $300, and the Sega Genesis was only slightly less. Much later, the Sega CD cost over a whopping $400. One store at North Gate Shopping Mall even had what appeared to be PC-Engine Shuttle (the Turbo Graphix 16 in the U.S.) systems. To put all of these prices into context, my dad says a crate of 24 beers at the time cost $10 and a Famicom game cost around $30. 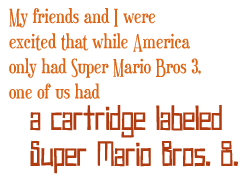 With the decision that my brother and I would jointly receive a Famicom on condition of good behavior, my mom told us to think about what games we'd want. Now, newsstands stocked copies of EGM, Game Players and British game magazines, but they were often months out of date. At the start of December, I was still using the magazines published in September to write my wish list.

Christmas shopping was also a bit different. While my parents shopped at Jo'burg's chic designer boutiques, which were at that time on par with those of Paris and London, I found these places boring compared to the more exotic consumer outlets like Bruma Lake on Jo'burg's outskirts. Bruma Lake was an enormous open-air market with hundreds of stalls selling every conceivable item allowed by law. We bustled against thousands of people buying and selling and haggling with each other, walking for three hours and not seeing half of it. There were crocodile handbags and ivory carvings at a fraction of high-street prices, hawked by vendors who had traveled from as far as the Cameroon, over 2,400 miles away. Sadly too young to appreciate this enchanting cultural bouillabaisse, my 10-year-old self made a beeline for the electronics stalls.

People are sometimes surprised by my love of Japanese games, but growing up in South Africa forever warped my perception of games. On a shopping trip to Bruma Lake before Christmas, I was presented with rows upon rows, hundreds, of multi-colored bootleg Famicom cartridges. My parents always allowed me to choose whichever game I wanted, because they weren't good at selecting games, especially when the games were labeled in Japanese. In my mind, each cartridge promised adventure, with the potential to be infinitely better than the last if only I made the right choice. Adding to the confusion, the cover art and names listed in my outdated magazines seldom matched what was on those stalls. Choosing a good game was an exercise in trial and error based on a piece of artwork no bigger than a pack of cigarettes, and the labels could be misleading. My friends and I were excited that while America only had Super Mario Bros 3, one of us had a cartridge labeled Super Mario Bros. 8. Only years later did I discover it was actually a hack of Don Doko Don 2, which in fairness was worthy of the deception. Today I'm still unable to find some of the titles I'd seen on those stalls, and as a result of this mystique I now see exotic Japanese imports as familiar and comforting.