After choosing some cartridges, the weeks passed in an impatient haze, until eventually it was Christmas Eve and my parents invited the Lais to celebrate with us. Mrs. Lai brought ice-cream cake on a bed of dry ice, while Mr. Lai clutched a bag filled with mysterious wrapped items. One had to be the games machine! Being half Polish, we began celebrating Christmas Eve after the first star came out. We dined on barszcz, uszka and 10 other dishes, followed by the opening of presents. Of course, like most children that age, I was impatient to dispense with the culinary traditions and ready to play some videogames! 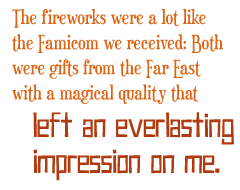 Our fathers sat outside drinking beer, swatting away mosquitoes and talking rugby, while our mothers prepared the big meal. Eventually it was time to unwrap boxes. Mine and my brother's gift was indeed a Famicom clone, plus the multicartridges we'd chosen. Watching my father tune the TV for us to play erupted in me a joy that I've seldom felt since - even in adulthood which brings with it disposable income and a more refined taste.

As our parents played mahjong (real mahjong - not the solitaire knock-off), we three played Ikki, B-Wings and Dead Fox. With its Japanese text I couldn't actually read the title, but the cover art featured an Arnold Schwarzenegger look-alike which convinced me I was reliving one of his films. Not that my parents allowed me to watch them, of course, but, being inquisitive, I'd gone through their collection of VHS tapes some months earlier. By the time we reached level two in Dead Fox, our parents wanted to watch that evening's Christmas movie, and so hijacked the TV to put on M-Net, South Africa's subscription film channel. The fact that we now owned a games machine and could play it at any time hadn't quite sunk in for me and my brother, and we complained about having to switch it off.

Much later, our Chinese friends brought out the climax of the evening: Mr. Lai's mysterious bag. Inside the bag were all manner of strangely shaped black-market fireworks, which he acquired from God-knows-where. They shot high and burned as hot as the night itself, producing the best explosions I've ever seen. They were a lot like the Famicom we received: Both were gifts from the Far East with a magical quality that left an everlasting impression on me. While I no longer have that first machine, I still fondly remember it and the Christmas when I received it.