Christmas for me will always mean temperatures of 32 degrees Celsius. That's 90 degrees in Fahrenheit, and only in the shade. Being in the southern hemisphere, the peak of South Africa's eight summer months begins in December. When I was a child, Christmas meant ice cream, braais (BBQ), grass yellowed by the sun and Chinese emporiums of bootleg games. 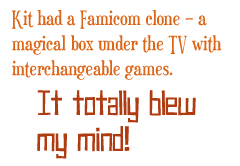 I lived in Johannesburg up until the mid-1990s. As I recall it, South Africa was a happy melting pot of Italians, Germans, Greeks, Portuguese, East Europeans, Chinese and local ethnic groups. My father, for instance, was a deep-sea fisherman who jumped ship to escape communism in Poland. We were also friends with a family from Hong Kong who left before the impending handover to communist China. Our house always had an eclectic mix of guests, and each nationality influenced our Christmas celebrations.

My first experience with games occurred in 1991. It was Christmastime, my favorite time of year since I had the whole month of December off from school. We were visiting our friends, the Lai family from Hong Kong and their son Kit who was around my age. Kit had a Famicom clone - a magical box under the TV with interchangeable games. It totally blew my mind! One multicartridge had 42 games on it, including Star Force, Ice Climber and Adventure Island, though in the latter's case we couldn't read the Japanese title and so named it "that skateboard game." I wanted one desperately, and with unparalleled fervor my nagging engine went into hyperdrive. It was nearly Christmas, and I'd been especially good, so my parents talked with the Lais about buying a Famicom clone for me and my brother.