Game designers are some of the industry's best customers. We buy lots of games, because we have to. It's for research, for professional development. Stop looking at me like that - I'm serious! 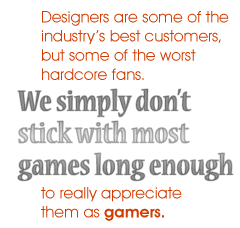 As designers, we play games differently than most gamers. Our job description is, more or less, to make our own games fun. That means developing a solid understanding of what "fun" is, where it comes from and how it's generated. When we pick up a controller, we aren't just playing - we're analyzing, we're dissecting, we're learning. We'll even seek out games that we don't like to figure out why other people like them. We want to see the systems behind the game, because it helps us to make better games ourselves.

Unfortunately, being a game designer usually makes you worse at enjoying games in your spare time. When your career hinges on your ability to understand games, you get good at recognizing the underlying patterns in the gameplay. By the time you completely and deeply understand the gameplay, the game itself becomes boring. Designer Raph Koster, in his book A Theory of Fun for Game Design, calls this "designeritis": We buy lots of games, then play them for about 15 minutes each, at which point we say "OK, now I see why this game is getting such good reviews" and move on. We're some of the industry's best customers, but some of the worst hardcore fans. We simply don't stick with most games long enough to really appreciate them as gamers.

Except that sometimes, we do.

In my case, it's the Final Fantasy series. I admit to being a shameless Square Enix fanboy. I'm sure that someday when I'm in a retirement home and Final Fantasy XXXIV comes out, I'll be first in line to pre-order it. Never mind that I'll only play the game once, because I don't have the patience to go through a hundred-hour RPG a second time. Never mind that I'm fully aware that the games are a series of interminable cut scenes punctuated by repetitive contests of abstract algebra. Never mind that I've understood the gameplay patterns of RPGs for most of my life, so I'm not learning anything new by playing yet another one.

My design skills should be kicking in to the point where the whole genre no longer interests me. So why don't I move on? For some reason, I love these games, even though I shouldn't. They are my guilty pleasure as a game designer.

I'm not alone. In talking with other designers, I've found that most of us have at least one game, genre or series that we play obsessively. My friend and colleague Brenda Brathwaite goes back to Civilization Revolution when she has some spare time to herself, even though she has already put so many hours in that she should probably be designing the sequel. Coray Seifert, a designer at THQ's Kaos Studios, admits to being a Civilization IV junkie. And I see quite a few game designers beating my Bejeweled Blitz score on Facebook each week (you know who you are), suggesting that they're putting too much time into that for their own good. I wondered, what is so special about some games in particular that allows them to hold the interest of game designers, the most discriminating of gamers? Or, coming at it from the other end, what is it about game designers that attracts them to certain games?

Letters to the Editor: Everyday Developer The Escapist Staff 0 Comments

Shut Up and Sit Down: Let's Play A Mega Game! - Saving the World from Alien Invasion Quinns 11 Comments
Comments on