My editor had no idea the irony he just dropped on me. He was referring to an article I'd pitched months earlier for this issue, "Everyday Developer," in which I promised to give a behind-the-scenes look at the regular grind of the average game developer. That was back when I still had something that passed for an "every day." 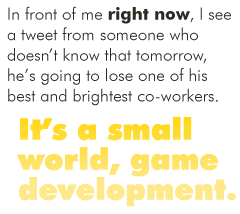 Reading the email, I'm sitting at my desk at the Savannah College of Art and Design, knowing that within a couple months I will no longer be a professor or a chair of the department. Instead, I'll be sitting at another desk at a game studio in California, having returned to commercial development full time. I have fewer than two months to announce my departure, pack up most of my life and move across the country. I received the email an hour before I planned to break the news to the Dean of my school that I'd be leaving the job I loved, one I'd held for only three years.

I know I'm one of many in this transitional space. Throughout the industry, we are going from one company to another. I had the luxury of making the decision to change roles myself. Others are doing so at someone else's bidding, having no idea that in executive offices, headcount reductions were planned days, hours or weeks before. During the time in which I prepared for my move, Pandemic closed, Maxis took a shot to the head, EA announced massive layoffs and a friend's project and team suffered a direct hit from a surprising and uncharacteristic torpedo fired from a studio working for the same publisher. That's merely a sampling. I have seen estimates that over 8000 game industry employees lost their jobs in the last year, and every month, completed, canceled and retooled projects bring still more.

In front of me right now, I see a tweet from someone who doesn't know that tomorrow, he's going to lose one of his best and brightest co-workers. I only know this because his co-worker called me this afternoon to see what I thought of the pay the other company was offering. It's a small world, game development.

I do not know of another industry where people hug one another upon meeting. At conferences, the hug is the customary greeting between friends. I have puzzled over this for some time. Perhaps in Hollywood and the fashion industries they hug. But game developers? We are not what many would consider "the hugging kind." I think other department chairs or administrators would be at best epically surprised and at worst horrified if I greeted them with open arms. I ask friends who work outside the industry, and except for those in 12-step programs, the "hug upon greeting" is an oddity.

I have a theory, though: I think we hug because we are uncharacteristically aware of and familiar with one another on a personal level.