Let me walk you through the process of making a game:

1) First, you get an idea. It can come from various places: Perhaps you're inspired by the mechanics of an existing game, or maybe you had an impressionistic or visceral reaction to a particularly good song. It's all clear to me now! you think. Best get to work - after all, no one is going to make your game for you. 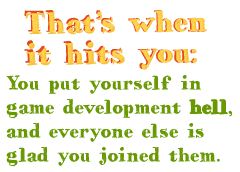 2) You open your copy of Game Maker and imagine everything coming together. Your mind juggles around commands and variables as you try to create a puzzle worth solving. During a dreadfully boring high school math class or college lecture, you doodle some character art in your notes, which you later scan and make into a few sprites. Next, it's time to find some sound effects and maybe even a music track under Creative Commons. Things are coming together. The game will be finished in no time!

3) Then comes the final and most important step in this process: You lose hope and give up.

Congratulations, you are now a bona fide indie game developer!

This unfortunate pattern has only gained momentum over the past few years. For some, game design might be an authentic calling. They have a mind for ideas and simply cannot rest until one brainchild runs free. Others may have illusions of grandeur, looking at the success of recent titles like Braid and seeing indie classics like Cave Story and La-Mulana ported onto consoles. Either way, these poor souls are being lured into a deep sandpit from which practically everyone emerges emotionally drained, with entire weeks of time wasted and a plethora of regrets that may linger for years to come. I'm talking, of course, about online indie game design forums.

Once offering a quiet but productive atmosphere for novice designers to hone their ideas, these forums have devolved into grim and ineffective emergency rooms whose influx of patients all suffer from the same delusion: that they're only one good game away from both indie credibility and mainstream success. Like any place where creatives of all rank and status linger, discussions are hemmed by unwritten rules and faux-sympathies. Other developers may feel at home with you because they are in the same position with their works-in-progress. But they also know your game has a 1-in-100 chance of completion just like theirs, and another 1-in-100 chance of actually being worth playing. Soon, your laboriously written code needs to be complemented with things like art and music, and if you don't have the hand for either, you'll be shunned for even asking for help.

That's when it hits you: You put yourself in game development hell, and everyone else is glad you joined them.