By day, City of Heroes/Villains (aka CoX) player Joseph A. Schweinzer is a photographer and IT professional. By night, he's Dr. Turgenev, a magic-origin illusion/storm controller and, thanks to CoX's Mission Architect system, author of the Developer's Choice-winning "Ghost in the Machine" (No. 1013) arc. He's one of 39,000 authors currently taking advantage of the new system, introduced in April 2009, that lets players directly shape the world they inhabit.

"Architect is the best and worst thing that has ever happened to the player base," Schweinzer says. "It truly allows for player expression to be taken to the ultimate extent: inventing worlds and encouraging the comic book writers in all of us to shine." 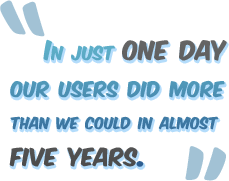 According to CoX Lead Designer Matt "Positron" Miller, "In just one day our users did more than we could in almost five years."

This system isn't just for diehard CoX fans; players of all kinds are creating their own stories to share with one another. When I get together with my favorite supergroup for a couple of hours on the weekend, we often try out a mission that one of us has written during the week. Our weekend arcs are filled with shout-outs and in-jokes for a group that has gamed together for years - a specially costumed NPC here, a catchphrase there and fun just about everywhere. It's a common use of the system and a definite part of its appeal: The ability to create more personalized content illustrates a value-added way to enjoy a game with old friends, one that has kept us playing (and paying) when regular content has become stale. The temptations are great; you can even play God and refashion the world with you and your friends as the main heroes.

"It's a lot like having a (very limited) ability to create your own MMO with all the hard parts already taken care of," says Dustin "Witch Engine" Stroud, best known for his arc "Blight" (No. 140423). "I write for my friends and supergroup mates, not for the public at large. I try to make everything I add to a story have a point or purpose for being there, and love to sneak in tons of references to all sorts of things - game canon, other videogames, whatever I can."

The Mission Architect tools are both robust and user-friendly, with the ability to add customized heroes as NPCs, choose from different settings like office buildings or caves and even instruct NPCs to call people out by name. For a storyteller/roleplayer who started out having to juggle playing multiple parts in a single evening and recruiting friends when she couldn't be in two places at once, this sort of automation is refreshing. Even better, once you publish a mission, it's available 24/7 all around the world, flatly resolving the common complaint of missed events due to time zone differences.

Letters to the Editor: The Network The Escapist Staff 0 Comments

In Defense of the Friend Code Anthony J Agnello 36 Comments

Give Me Dessert First Shamus Young 55 Comments
Comments on