Friend Codes are vintage Nintendo. They are jaw-droppingly stupid, a needless inconvenience for players looking to play a quick game of Mario Kart with their friends and a stark contrast to the simple, often casual games Nintendo has shackled them to. They're indicative of a corporation accustomed to completely ignoring broad technological trends and one that has typically exhibited gross incompetence when it does hop on the bandwagon. Friend Codes aren't even archaic - it was easier to get into the Essex MUD back in 1978, and that was the first networked game of any kind in history.

If you're one of the many players out there who have never gone out of their way to game online with a Nintendo console, here's how Friend Codes work: When you play a game with an online component on either a DS or Wii, the system generates a unique, 12-digit number specific to that console/game coupling. In order to maintain a list of friends to play the game with online, you must exchange these 12-digit numbers with each and every one of them. Meet someone in a random match and want to add them to your friend list? You still have to find a way to actually get their code. The Wii goes a step further by having codes for each individual system which users can exchange to send each other messages, trade Miis or gift games to one another.

This mishmash of registration techniques is Nintendo's answer to Xbox Live and PSN accounts. It's tiresome, convoluted and, considering Nintendo's devices are generally marketed toward casual players, the opposite of user-friendly. But Friend Codes are also, like almost every other seemingly inane invention from the house that Miyamoto built, inspired.

Not in the way they were intended to be, of course. 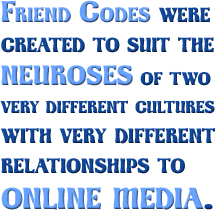 Friend Codes were ostensibly created to suit the neuroses of two very different cultures with very different relationships to online media of any stripe. When Nintendo launched the Nintendo Wi-Fi Connection in November 2005, the friend code was intended to both suit the Japanese gaming populace's need for constant anonymity at the same time as it soothed the paranoia of Western parents. The inconvenience of exchanging codes meant Japanese players wouldn't be bogged down by incessant friend requests from random players, and Westerners petrified of child predators and foul language would have a stout boundary between those hazards and any innocents playing Metroid Prime Hunters.

That has been the party line since the company announced the service in early 2005. Nintendo President Satoru Iwata, begrudgingly admitting friend codes' flaws, still stands by the Friend Code as an online-gaming prophylactic. "I don't think friend codes are perfect," he said in an interview in 2008. "However, if it's an online world where you can get access to anybody without any restrictions, I as a father do not feel like allowing my daughter be engaged in that kind of world. In terms of the people who have never experienced online videogames before ... we really want to assure the security and safety for them to do so."

Letters to the Editor: The Network The Escapist Staff 0 Comments

A View From the Road: Matchmaker, Matchmaker... John Funk 51 Comments