Despite having about a 150-year head start, comics matured roughly at the same time videogames did. The independent anthologies of the early '80s, such as Art Spiegelman's RAW and R. Crumb's Weirdo, laid the groundwork for modern graphic novels and journals like MOME just as Nintendo parlayed a string of arcade successes into their console-as-post-crash-industry-savior, the NES. But while most comix grew up, the aforementioned cartoonists and their collaborators going on to contribute to the likes of The New Yorker and The New York Times, some refused. Out of that early bunch of alt comics collections, only one remains: Heavy Metal, a snarling, tit-filled fusion of genre fodder and erotica whose impact on videogames, for better or for worse, is unmatched. 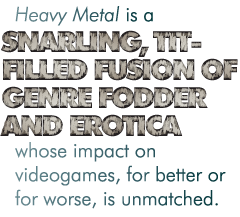 First published in the United States in 1977 as the stateside edition of French mag Métal Hurlant, Heavy Metal was a response to the silliness of pre-Dark Knight capes and cowls: strictly for adults (as its black-bagged gas station distribution will tell you), self-serious to the point of being somewhat cringeworthy, with a focus on lowbrow high fantasy, dark fantasy and science fiction. Think: a wicked-rad van painting of a huntress riding a cyberpunk shark - naked. Despite its mixture of nudity and ultra-violence, a string of incredibly talented contributors throughout its lifespan, including Moebius and H. R. Giger, have kept it beautiful, if even a bit heady.

Sadly, the magazine's profile has declined in recent years. While 1981 saw the release of the big-budget animated film Heavy Metal, often considered a small masterpiece of '80s adult animation, 2000 was saddled with the direct-to-video release of Heavy Metal 2000, a vanity project by the magazine's current owner, Kevin Eastman, of Teenage Mutant Ninja Turtles fame. But while the magazine's relevance to film waned, its influence on videogames only grew.

Two games spun off from the brief resurrection of the franchise in the early Aughts thanks to the DVD release. The first was Ritual Entertainment's Heavy Metal: F.A.K.K.². A direct sequel to the events of Heavy Metal 2000, F.A.K.K.² featured protagonist Julie - whose character is based on, and voiced by, Kevin Eastman's wife, Julie Strain - fighting an evil entity named GITH in a third-person, Quake Engine-powered shooter. Though it was often bogged down by its heavy-handed anti-conformist backdrop and clunky platforming sections, it was nonetheless a beautiful game. It played to the strengths of Heavy Metal's (tit-filled) world and made for the perfect followup to SiN for Ritual, who had seemingly taken the "dude shooter" mantle from 3D Realms before being swallowed by casual game developer MumboJumbo in 2007.