Your job, he said, is to fall in love. Everything else is just detail.

It wasn't what I expected to hear. The rest of AnimFX '09 had been about animation technology, game sales figures and visual effects processes. Then John Stevenson, formerly a Muppeteer and more recently the co-director of Kung Fu Panda, strode onstage and told stories about the L word. Afterward, amid the standing ovation, you could see minds clicking across the auditorium. It was as though a roomful of people had suddenly been given permission to view the world from a mad and goofy angle that had nothing to do with craft or money. 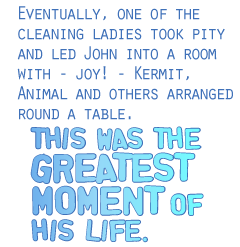 He got me thinking. And feeling. Here's some of what he said and where it took me.

In the late 1970s, John Stevenson was a pimple-faced kid working on the low rung of a British advertising firm. One day he spotted something in a newspaper: The show The Muppets was looking for an artist. John's heart stopped. He loved the Muppets. They were the greatest, funniest, most wonderful thing in the world. The chance to work with Jim Henson would be incredible - but it wasn't going to happen. It was a high-profile gig. Serious professionals would be applying. John didn't even have a portfolio. He made the audition call anyway, hoping for one thing: He'd get the chance to meet Kermit before they discovered he was a fraud and kicked him out.

John showed up at the studio with a "portfolio" he'd assembled overnight. There were indeed a bunch of solid artists trying out, guys who could really draw. By comparison, John's pieces were crap. He knew they were. So he sat and waited, knowing the job wasn't going to happen but still hoping to get a glimpse behind the curtain.

Time passed. And re-passed. Eventually, one of the cleaning ladies took pity and led John into a room with - joy! - Kermit, Animal and others arranged round a table. This was the greatest moment of his life. He sat down and began to sketch.

Eight hours later or so, Jim Henson popped his head around the corner and saw something he recognized. The other artists had been better, definitely, but this kid was in love. Here was someone who would clearly show up and draw the Muppets all day, every day - without pay if need be - for the simple reason that he was truly absorbed by them. The kid could eventually learn to draw better, but the pros couldn't learn that Kermit-loving spark.

John Stevenson got the (paid) job and became part of the Muppets team. Thirty-odd years later he helmed Kung Fu Panda, a film about someone who meets his idols, gets a chance to learn from them and becomes a hero himself.

That Guy Just Turned Into a Puppet! Elizabeth Grunewald 17 Comments