But it's less an issue of capability and more an issue of the toolset to which creators in each genre have access. Film is, at its core, a passive form of entertainment that requires careful authorial control. When you watch The Godfather, you are experiencing that film the same way millions of others have; your reaction may be different, but the tempo, atmosphere and general feel of the movie were dictated by Coppola and his team. They wanted you to feel something very specific, and they have the uncompromising control to make that happen. 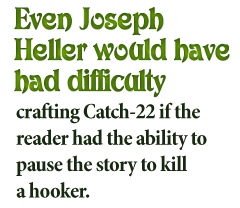 Games, on the other hand, are the antithesis of a passive experience. The nature of the medium demands that the audience has the ability to dictate the flow and the results of a game. To say this hobbles the construction of a story of much depth is an understatement. Pacing is perhaps the greatest victim of this phenomenon. Writers depend on the flow of a story to reinforce emotion and meaning in their words. Even Joseph Heller would have had difficulty crafting Catch-22 if the reader had the ability to pause the story to kill a hooker. No, game narratives have to be flexible and fluid, which doesn't lead to deep themes and complex plots but instead encourages simplistic tales that can adapt to digital chaos.

While strictly linear experiences such as BioShock and Deus Ex have allowed for comparatively more thoughtful and complex stories, these games do not seem to be the future of this industry. The shift toward open - world, social and online gaming is becoming more and more apparent with each passing year. In addition, publishers are eschewing games that offer one-time experiences for titles with more replayability and long-term profit potential. Linear narratives that lead the player along precisely the intended path are becoming a rarity, not the norm.

This doesn't necessarily spell disaster, though. We need not call for a priest to stand above game narrative's jaundiced and wraithlike form to drone the last rights as Guitar Hero and Peggle watch with quietly reserved schadenfreude. While games that play out according to a true internal narrative may be fading away, a new type of storytelling, completely unique to gaming, is emerging. External narratives are becoming the stories that set remarkable games apart.

Single - player-only experiences are giving way to ones with robust multiplayer and cooperative gameplay. Where it used to be generally accepted that most games would feature primarily a single-player campaign with the possibility of a multiplayer option tacked on, we're seeing a dramatic role reversal. Games like Modern Warfare 2 are fully realized multiplayer platforms whose single-player campaigns are short and often ignored completely by many gamers. Indeed, strictly multiplayer titles like Left 4 Dead are popping up more and more.