These games haven't completely abandoned the idea of a story; developers are just allowing the story to develop in a completely different manner. External narratives demand that the player actually guide the story, that the narrative is not and cannot be fully defined and fleshed out without that external influence. The narrative in Rock Band has nothing to do with what venues you played or what songs you played to get there. The narrative happens when your 55-year-old mother belts out a Beastie Boys song and the room is torn between howling with laughter and joining in. Likewise, I don't remember a thing from the single-player campaign from *Gears of War 2; I do remember my friend convulsing with glee every time he took a chainsaw to my chin. 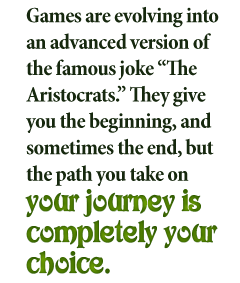 External narrative is more than just our adventures in multiplayer. Some games do nothing more than provide you the tools to create your own story from the ground up. Civilization and its descendants are prime examples: With the framework Sid Meier and his team provide, you can rewrite the history of the world, complete with military and technological milestones on the path to Aztec world domination. The Sims is much the same way, albeit with less artillery and naked aggression from Gandhi. Games are evolving into an advanced version of the famous joke "The Aristocrats." They give you the beginning, and sometimes the end, but the path you take on your journey is completely your choice.

Of course, plenty of games still try to maintain a complete internal storyline. But even those titles are handing more control of the minutiae of the story over to the player. Grand Theft Auto 4, for example, was praised for its tale of the American dream gone wrong. The story of Niko Bellic, however, was filled with gaps. Through the entirety of the game, you are given a loose framework for what's to happen next, and you are the one who fills in the rest. The story of GTA4 was not simply the fact that you killed some random Russian mobster. The story, as in the devil, sits happily in the details.

This is the future of narrative in our games. I suspect that, as time passes, we will see the most critically acclaimed titles are not the ones with Objectivist-inspired tales of hubris or mute scientists enduring metaphysical trials. They will be the ones that provide us with the tools to tell our own stories. Perhaps the time has come to realize that the Citizen Kane of games will never come, and that's all right - Citizen Kane would make a terrible videogame, anyway.

Dietrich Stogner is a freelance writer living near Nashville, Tennessee. You can follow him on his blog at www.neutronicfusion.com.