Gaming came to me later in life than most. My parents, believing that the Nintendo would convert my brain into rotting turkey fat, denied me the pleasures of console ownership. Instead, I grew up reading everything I could get my hands on. Amazing titles like Ender's Game and Lord of the Flies sat side by side with Star Wars novels on my bookshelf. Later, that love of story transferred over to film, where movies like The Usual Suspects and Rear Window sucked me in. 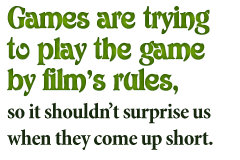 When I started my gaming hobby in earnest with the gift of a Sega Dreamcast, I expected to see that same type of storytelling. I wanted a story that could snatch the breath out of my chest and affirm my belief that games had the ability to craft a tale more than a lifeless shadow. Ten years later, I still haven't found it.

I know I'm not alone. Many gamers and forum dwellers pine for the day that we'll see the Citizen Kane of games, but I don't think any of us really know what it is we're asking for - we just know that we haven't reached it yet. Hell, I don't think we've reached the Weekend at Bernie's of gaming. But maybe we shouldn't be asking when we're going to see that type of storytelling in games. Maybe we should be asking if that's what we want in the first place.

We all have a habit of looking to film narratives as the touchstone with which we compare those of videogames. It makes sense on a certain level; as a dynamic, visual storytelling medium, film is the closest approximation to videogames. But comparing stories in games to even the most rudimentary film stories is somewhat akin to saying that Michael Jordan in an inferior athlete to Joe Montana because he hasn't scored as many touchdowns. Games are trying to play the game by film's rules, so it shouldn't surprise us when they come up short.

That's not to say that there aren't similarities. Compared to other forms of entertainment, gaming is still in its infancy, and just like the early days of film, game makers are consistently asked to use the tools at their disposal to craft works that exceed their audience's expectations. Robert Holtzclaw, a professor of English and film historian at Middle Tennessee State University, explains that film had to accomplish much the same during the silent film era. Despite the limitations of those early black-and-white movies, there were a few directors who managed to craft narratives of amazing complexity. "In some silent films, there were stories in which we would cross-cut between periods, with storylines set in one era and another set hundreds of years later," he explains. Truly creative and innovative people, it seems, can find ways to create remarkable experiences even with astonishingly scarce resources.