Jesse Stern doesn't look like I expect. I expected the writer of Call of Duty 4: Modern Warfare, Modern Warfare 2 and the ultra-popular television show NCIS to be some kind of special forces veteran - shaven-headed with scars from close-call bullet wounds. Not quite. Stern is sporting wavy hair, a deep tan, a T-shirt, board shorts and flip flops. He looks like the kind of laid-back guy I'd expect to see on a beach back in Australia. 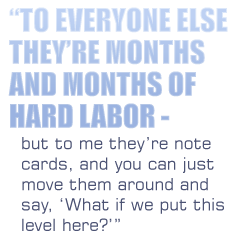 My goal for our meeting was simple: I wanted to find out how you can take a bunch of guns and explosions and make people care about them. Call of Duty 4 shocked the gaming world by injecting a blockbuster story and believable characters into a first-person shooter. When Stern and I spoke, Modern Warfare 2 was still on the way - but the sequel turned out to be plenty shocking in its own right.

Stern's role in the original Modern Warfare began long after the developers had started crafting levels and character models. "In Call of Duty 4 they had a scenario already," Stern says. "They had the levels built and everything laid out. Then they hit a wall in terms of how to tell the story, and that was when they started talking to writers.

"I came in and pitched, 'Here's what I would do. I like this; I'd do more of that. I don't think this is working all that well - instead I'd put one of these in here.' A few months later, Infinity Ward called up again and said, 'We're ready for you.' From that point on, I was the story specialist."

Each level of Modern Warfare was like an episode of a TV show, Stern tells me, and each game like a season. "There are a million ways of telling a story," Stern says. "With NCIS, I love to mess with our format by using flashbacks and scrambling the narrative. Doing a television show, you don't just look at each episode - you look at each episode as it's going to have bits of the whole season.

"We don't do many serialized storylines. The elements of our story that are serialized are our characters. You don't need to see every episode to know what's going on, but if you do, you're going to get a lot more out of it. You'll enjoy it more. That's how you build a good season: by sprinkling those serialized elements throughout."

According to Stern, writing a videogame is similar. Each level is just a piece of the puzzle, and making it click is as easy as shuffling cards.

"This is a level where you do such and such - how does that relate to the next level?" he says. "To me they're like note cards. To everyone else they're months and months of hard labor - but to me they're note cards, and you can just move them around and say, 'What if we put this level here? Okay, you'll have to get a thing.' That will just be a 'thing' for months, and then finally it turns into 'something.' How about it's a guy? How about it's a clipboard, or a bomb? You build it up, and it's funny how it develops and turns into a story."