But for all TV and videogame writing's similarities, there are plenty of differences as well. According to Stern, the biggest difference in in the initial approach. "Building a videogame," Stern says, "is like, 'Hey, let's build a lot of cool sets,' and then they come up with some ideas of what to do with them. The first thing you do is make the world. You can't do that in the real world; you can't get out of bed and say, 'Let's go out to the desert.'" In other words, you need a damned good reason to send the cast and crew of a TV show halfway across the world; but when you can build your setting from the ground up, "because it's fun" is reason enough. 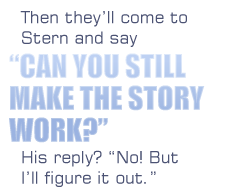 Making a TV show, Jesse explains, is all about telling an entertaining, visually coherent story. But you don't just watch videogames - you take part in the action. So to make sure that the gameplay flows from one section to the next and players don't get bored, the developers will shuffle the deck. The studio will take a level that their playtesters loved and move it forward to hook players within the first hour of gameplay. Then they'll come to Stern and say "Can you still make the story work?" His reply? "No! But I'll figure it out."

"When we started working on the second one," Stern says, "it took us a while to find enough breadcrumbs that we'd left in the first game, to identify things and threads we liked enough to pick up, characters we wanted to revisit and ideas and events that we could add another chapter to. It took a while to get there. There was some conversation of doing another standalone game."

But in the end, preserving the link between the two Modern Warfare games won out. Making sure players feel connected to the game world is all-important, Jesse says. They need to know who they are, where they are, what they're doing and why they're doing it. That's a tricky proposition, especially in a Call of Duty game where there are so many different stories to weave together. One moment you're in one theater of war, and suddenly you're in another. You don't know where the story is going or who is going to see the end of it. There's an unpredictability that grabs players and doesn't let go.

Stern recalls one thread of story he was particularly proud of. "In Call of Duty 4 there was Zakhaev, this bald-headed, scarred-up, one-armed Russian with a giant golden gun," he says. "I remember pitching the idea that he had one arm, and you discover later that he has one arm because you shot his other arm off, and you get to play that mission. I love that kind of shit."