Modern Warfare may have been the first game that made me feel better, but it certainly wasn't the last. Videogames have always been a very big part of my life, and so playing more of them after the breakup was perfectly natural. My ex was incredibly efficient in getting my things ready for me to move out of the apartment, and, while it hurt like hell to see all my stuff boxed up, it meant that I had my PC, Wii and 360 ready for use at my parents' house. When you have a wife and a house, and it is suddenly taken away from you, it's very easy to start moping about what you have lost, and the last thing I wanted to do was roll the memory around in my head and relive the moment over and over. I quickly got the internet set up in my new, unfamiliar room, and dove into the Champions Online beta. 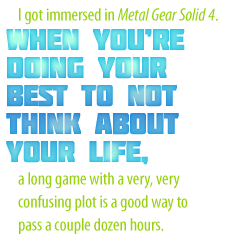 After a couple of false starts - you don't want to see how stupid my first hero looked - I created the mighty Warforge, an experimental combat robot programmed to fight crime. His back story wasn't the most original, and he looked almost exactly like War Machine from the Iron Man comics, but compared to a lot of the characters that were fighting aliens, ghosts and mutants alongside me, I looked like a seasoned comic book pro. The intricate nuances of Champions Online's character builder and gear system kept my mind occupied with something other than my loss. I'm not normally an MMO kind of guy, but zooming around on jet boots, blasting criminals with heat-seeking missiles and cutting through ne'er-do-wells with Warforge's laser vision was a lot of fun, and was enough to keep me playing - and to stop me from dwelling on how bad I felt - for a few weeks, at least. Maybe life wasn't so bad, I was going to be all right.

Then the beta ended, and I lost my job.

I suddenly had plenty of time on my hands, which, for a person dealing with such heartache, was not the ideal situation. So, after a particularly upsetting visit with my ex, I spent a sizeable chunk of my severance pay on a PS3 and a bunch of games and went to town. I got immersed in Metal Gear Solid 4. When you're doing your best to not think about your life, a long game with a very, very confusing plot is a good way to pass a couple dozen hours. You could infer all kinds of things from the game's story, as the treachery of women plays a big part in the plot, but its appeal was actually much simpler than that. If I was concentrating on nanomachines, Big Bosses, and various types of Snake, I simply wasn't thinking about my breakup.

Top 5 with Lisa Foiles: Top 5 Fake Endings - Just When You Think It's Over... Lisa Foiles 65 Comments