After dismantling the Patriots, I turned my attention to InFAMOUS, electing to aid the poor folks of Empire City after the damage caused by the Ray Sphere. I spent much more time with that game than was strictly necessary. I liberated a significant portion of the city from the gangs that occupied it, and stopped to heal wounded civilians, even when I had somewhere I really needed to be. I wasn't consciously dragging the game out, but I didn't have much else to do, so it's no surprise that I took my time. 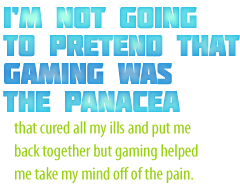 As with all wounds, eventually it stopped hurting as much and started to heal. As days became weeks and then months, I moved on and put the pieces of my life back together. I got back in touch with old friends, got myself a new job and began to adjust to my new life, doing things I'd always wanted to do, but could never have done as part of a couple. With a little time and a little distance, I began to see my break-up as a fresh start rather than a tragic end, and began doing my utmost to live well and be a better person.

I'm not going to pretend that gaming was the panacea that cured all my ills and put me back together again - there's no game that makes it easier to get used to sleeping alone after a decade of sharing a bed - but gaming helped me take my mind off of the pain. It was much better to be angry over losing a fight in Street Fighter IV or to get worked up over a tricky level in 'Spolosion Man than it was to be angry at her for hurting me so badly. By engaging me and forcing me to concentrate on the moment, rather than pining for the past, gaming helped me get through a time that would have been almost impossible without it.

Logan Westbrook is a news contributor for The Escapist. Occasionally he updates his blog, www.verbscience.com.

No Right Explanation: Gameplay vs. Story Firefilm 17 Comments
Comments on