Videogames are over 30 years old, which means everyone who was there in the early days is over 50 today. (Ralph Baer, inventor of the first console, is nearly 90!) That puts us at a point where these pioneers are nearing their maximum life expectancy; indeed, several prominent figures in videogame history have already passed away. What saddens me is that we as gamers, the cognoscenti who should follow and champion the world of videogames, seem either unaware of this situation or indifferent to it. 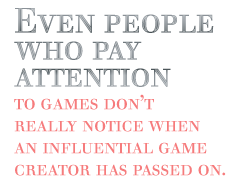 Unlike with other media such as music or books, the deaths of veteran game developers are seldom given a respectful level of coverage in the gaming press, and they're nowhere to be found in mainstream publications. As a result, it's not surprising that even people who pay attention to games don't really notice when an influential game creator has passed on. By now there are too many to list them all, but I want to talk about both the visionaries whose life's work should be known to you, even if their names aren't.

The International Game Developers Association (IGDA) has an incomplete memorials page listing over 30 industry figures, including Dave Arneson and Gary Gygax, co-creators of Dungeons & Dragons. Another early pioneer, Alan Kotok, co-developed not only Spacewar! but was also part of the team that built the first joystick. Sega's Chairman between 1984 and 2001, Isao Okawa, also deserves special mention: Along with supporting numerous Japanese technology companies, he personally funded the development of the Dreamcast and used his own money - $695.7 million worth of stocks - to help Sega stay afloat while it moved away from hardware development and toward a software-centric business model. All of these people have left an important mark on the gaming landscape.

But since the memorials page is a constant work in progress, many prominent developers haven't yet made the list. Few outside of England are likely to have heard of the late Jeremy Smith, but he co-developed Exile for the BBC Micro in 1988, a seminal game with realistic physics and a subterranean eco-system that did Metroidvania gameplay as well as Metroid itself. And how many could name the late, award-winning Richard Joseph, perhaps best loved for his Commodore 64 and Amiga music, including the Cannon Fodder song "War Has Never Been So Much Fun"? Then there are voice actors such as Maddie Blaustein, sibling of MGS localizer Jeremy Blaustein, who played memorable roles in games such as Valkyrie Profile and voiced Meowth in the Pokemon cartoons. There are at least 20 other names I could mention, all talented people who worked on well-loved games ranging from LandStalker to Tomb Raider.