It began as a pilgrimage to the 2009 Tokyo Game Show, my third TGS since I arrived in Japan that many years ago. My recent unemployment left me with an excess of free time and a dearth of funding, an imbalance I remedied by hitchhiking 550-some miles from the rural town of Saga all the way to the main event. Not only did I manage to make it to and from the game show with my wallet and kidneys intact, but I also gained valuable experience that saw me well on the way to my next level. At least, that's what I understood after my very first ride. 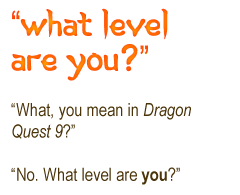 He called himself Miso, and he was a monk making his regular trip from his home in southern Japan to his university in Hiroshima. Since Hiroshima was my first destination on what turned into a week-long adventure, I couldn't have been luckier. Conversation came easily after I learned that his religious leanings didn't prevent him from enjoying the odd videogame. Top on his list was Dragon Quest, a guilty pleasure shared by almost every stranger who stopped to pick me up. More unique than his favorite game, however, was his next question.

"What level are you?"

I've played enough roleplaying games to say with complete confidence that I've indirectly gained thousands of levels. I've assigned enough attribute points to provide stats for a small city and unlocked so many spells and abilities that Harry Potter is more a busker than a wizard by comparison. But I still couldn't give an answer off the top of my head, and the number I found was a result of desperation rather than deliberation.

My host was much quicker to reply.

"That's OK," I said, playing along. "Once I get to Tokyo, I plan on walking around in the bushes, challenging random squirrels and passersby until I gain a few levels."

"The only monsters I fight come from within."

The conversation continued in this line with how many hitpoints I had (400-some) and which abilities I had unlocked (Japanese and hitchhiking, to name a few) before trailing off into other realms, but the question stuck with me: What level am I?