Videogames and the stars have always been connected. Lovers of computers and engineering have long recognized aeronautics as king, their imaginations ensnared by the great unchartable dream of conquering the worlds beyond Earth. It should come as no surprise, then, that one of the great breakthroughs in gaming was the simulation of an entire universe and a story that puts the player in the role of interstellar explorer. Enter Starflight. 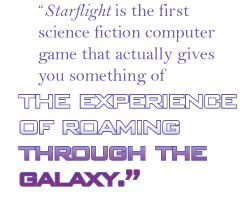 In 1983, the Commodore 64 reigned supreme and Paul Reiche's Archon was taking the home computer world by storm. Rod McConnell, a pilot and entrepreneur, approached his racquetball partner Joe Ybarra, a producer at Electronic Arts, with the notion of making a computer game. Dave Boulton, an experienced programmer and colleague, had an idea about using Mandelbrot math to create a fractally generated universe that players could explore infinitely. McConnell, no developer himself, hired Boulton, engineering student Alec Kercso, programmer Bob "Doc" Gonsalves and later Greg Johnson and Tim C. Lee to form Binary Systems. None of them had ever made a game before.

Johnson had just finished a degree in bio-linguistics at the University of California at San Diego - a hybrid of animal cognition, Asian philosophy and computer programming - when he took the job with McConnell. Kersco, then an engineering student whose father knew McConnell, was his roommate. Kersco had been working on the game at home on an Atari 800, but wouldn't talk about what it was. When Johnson finally got an interview with McConnell, he showed off a set of hobby game designs on graph paper and a comic called Samurai Spaceman. They hired him, he says, "for next to nothing." He borrowed about $15,000 from a friend to make enough money to rent an apartment in Burlingame, California, where Binary Systems was located. "I didn't think I was going to be doing it for long," he says. "My mom was really disappointed. She didn't know what the heck I was doing."

Neither did the team. But when the project finally reached its conclusion, the numbers spoke for themselves: 16 colors, two diskettes (360K each), 800 planets, three years of development, eight alien races, six system ports and over 1 million copies sold - a platinum achievement and a breakthrough for home computer games. In 1987, Computer Gaming World called it "the best science fiction game available on computer," and in 1988 science fiction writer Orson Scott Card introduced videogame commentary into his Fantasy and Science Fiction book review to say of it, "Starflight is the first science fiction computer game that actually gives you something of the experience of roaming through the galaxy. ... I have found this game obsessively fascinating - and the graphics and player interface are superb."

Getting Back in the Game Logan Westbrook 39 Comments