Batman fans must avoid thinking about many things. Some are thuddingly obvious, like how one guy can't possibly be the world's greatest detective and an unbeatable martial artist and a master of disguise and know every square foot of downtown Gotham City and run a multi-billion dollar megacorporation and - yeah, whatever, bored now. Nobody questions Batman's ludicrously comprehensive skill set because it's beside the point. That's what we want Batman to be, so he just is, okay? 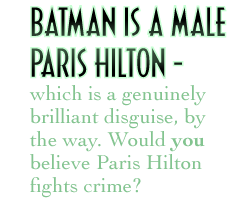 The really unthinkable ideas aren't merely conventions of the superhero genre, either. Consider masks: In comics, if you wear a mask, nobody can tell who you are. Real-world masks don't work that well, but if you don't assume that convention, the whole premise falls apart. Likewise, Batman comics have been published for 71 years; he fought Nazi spies in World War II, yet Bruce Wayne is still about 35 (albeit currently dead). So what? Might as well complain people in a fight wouldn't have time to speak all the text in their word balloons.

Longtime Batman fans may suspect "unthinkable" refers to the goofball Golden Age stories featuring Bat-Woman and Bat-Dog and the other-dimensional imp Bat-Mite - the era when the Caped Crusader dodged giant Lincoln pennies and robot tyrannosaurs, fought on colossal typewriters, visited other planets and traveled through time. Nope! Far from shunning those lovably corny yarns, some Batman writers today still find them inspiring. Grant Morrison, Serious-est of All Serious British Comics Writers, wrote a 2008 "R. I. P." storyline that inventively refashioned Bat-Mite and the silly 1958 "Zur-En-Arrh" idea, and he's planning a time-travel storyline, "The Return of Bruce Wayne," inspired by other '50s madness. Bring it on.

(A friend who read a draft of this piece suspected I meant the cliché of homoerotic tensions between Batman and his current Boy Wonder - a notion that also dates from the 1950s, in Frederic Wertham's notorious anti-comics tract Seduction of the Innocent. In all honesty, this never crossed my mind because - news flash - it's stu-u-u-pid, completely unsupported by the evidence.)

No, the truly unthinkable thoughts - the ones that annoy fans viscerally - arise from the Batman character premise taken on its own terms, in full faith and respect, with the best and most charitable will.

Think of Bruce, impeccably playing the society airhead. He's always attending swanky Gotham charity balls (never mind that super-villains have raided so many of these affairs that people would soon stop attending). He's a male Paris Hilton - which is a genuinely brilliant disguise, by the way. Would you believe Paris Hilton fights crime?

At these parties, Bruce makes empty-headed gossip until he's convinced everyone he's an idiot. How does he come up with this chatter? Obviously, he has to study it. Though we're never shown this, he must have a clipping service prepare dossiers of pop-culture events, which he skims in the limo as Alfred drives him to the party. The Darknight Detective, as part of his holy war against Gotham's underworld, reads all about society debs and Jay Leno and American Idol. His bat-computer tracks Brad Pitt and Angelina Jolie. Batman, sitting in the Batcave, diligently memorizing this month's Playboy Party Jokes - you don't want to picture that, do you?