The classic game EarthBound is filled with all sorts of intriguing sounding food, such as Pasta di Summers, Calorie Sticks, Royal Iced Tea, Piggy Jelly and Peanut Cheese Bars. The bars in particular are noted by fans as one of the best foods in game for recovering health, as well as being series mascot Mr. Saturn's favorite dessert. I'm fond of peanut butter, baking and retro games in almost equal measure, so it seemed like an excellent idea. 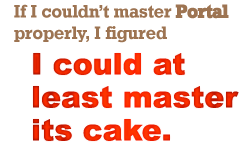 The recipe I found at Snack or Die requires few ingredients, but a bit of effort (and, ideally, a decent mixer). Starting with store-bought peanut butter cookie dough, I constructed not a dozen individual cookies, but one very large cookie. I was tempted to stop right there and then, but I pressed on. The second half of the recipe involved mixing actual peanut butter and cream cheese. These ingredients are difficult to mix by themselves, but put together they're twice as hard to handle. Sadly, my only available mixer at the time was a single fork, so I threw myself into the process with the gusto and bravery I usually reserve for boss fights. At the end of a seemingly endless battle between fork and bowl I had a spreadable topping and was ready to proceed.

Finally, after spreading the cream cheese topping over the cookie base and waiting for a half hour for them to set, they were ready to eat. My peanut cheese bars looked tasty, if a bit thick. Unfortunately, the creamy peanut topping simply didn't want to adhere to the cookie bottom. Slight structural integrity issues aside, however, I deemed my peanut cheese bars a modest success.

The Portal cake is iconic. The ultimate cliché in a discussion about food and games, it was a perfect fit for my rapidly growing collection of culinary delights. Although I consider myself an accomplished baker and have an enviable secret cheesecake recipe, I've never made a layer cake. If I couldn't master the game properly, I figured I could at least master its cake - at least, that's the lie I told myself as I set off to the kitchen.

Everything went smoothly at first. The layers themselves were composed of German chocolate cake mix, oil, egg and water. But once I took the pans out of the oven, a bit of a situation arose: My mini-cake layers had domed tops. In fact, they looked more like oversized cupcakes than stackable discs.