Worried, I messaged one of my best friends, who assured me that the domes should fall a bit upon cooling. They didn't. Undaunted, I cut off the domed parts and started layering. That turned out to be a risky proposition: Three-fourths of the way through, the bottom layer started to sink, tipping my concoction at a dangerous 45-degree angle. I decided to put some cherries on top, toss in a candle and document the process before the fragile structure collapsed on itself. 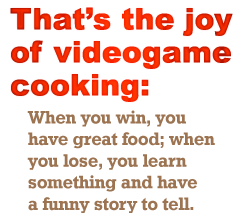 But even in failure, there is learning. It tipped even further to one side after I cut a slice, but I was surprisingly okay with this outcome. My Portal cake was probably the most ugly duckling cake ever, but it was not a lost cause. Anyway, the cake was great - it's so delicious and moist.

As it goes with games, sometimes in cooking you win big or you fail, and occasionally you have to throw out your most painstaking strategies and just wing it. Julia Child once said, "In cooking you've got to have a what-the-hell attitude," and I tried to take that advice to heart. That's the joy of videogame cooking: When you win, you have great food; when you lose, you learn something and have a funny story to tell.

After my videogame cooking adventure drew to a close, I opened the fridge to survey the leftovers, tucked away Tetris-style in little containers. There, I found a vast assortment of both finished dishes and unused ingredients waiting to find a home in other dishes. So, in light of all the new recipes and techniques I've learned, the ability to explain the difference in varieties of blue cheese and the fun I've I had eating new things, I did the most logical thing to me at that point: I picked up the phone and ordered out. Sometimes you just want someone else to do the cooking.

Nova Barlow hasn't done much cooking since writing this article, and finally owns a proper mixer.