It's cold, even for Russia. The crowd of civilians in Red Square stand shoulder to shoulder, their breath condensing in the air as they wait for the presidential candidate to take the podium. He's ahead in the polls, but he takes the stage with a definite unease, slightly hunched as if affected by something more than the winter chill. 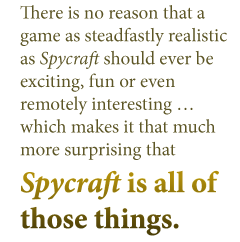 As he opens his mouth to speak, his head snaps back, and blood spatters against the wall behind him. The clean red dot of an entry wound marks his forehead. His body crumples helplessly to the ground as his murderer escapes.

If I were Sam Fisher or Solid Snake, I'd be infiltrating a terrorist base right now to find any leads on the assassin. I'd be sticky-bombing and cardboard-boxing my way to the truth. But I am neither of these men. I'm Thorn, a rookie CIA agent with limited weapons training and zero experience. And with the assassin getting further and further away by the minute in what increasingly seems to be the start of a major conspiracy to topple the Russian government, I fight back the best way I can: by sitting at my desk in Langley, thousands of miles away from the assassination itself, sifting through surveillance footage.

This is how I will find the killer. This is how I will save more lives than Sam Fisher and Solid Snake put together. This is Spycraft: The Great Game. Developed in coordination with former CIA Director William Colby and former KGB Major General Oleg Kalugin, Spycraft is, quite simply, the most realistic and immersive spy game ever made.

It doesn't sound all that exciting on paper. A game where you spend most of your time analyzing evidence and digging through files? Where you only fire your gun a half-dozen times? Where you do actual spying? There is absolutely no reason whatsoever that a game as steadfastly realistic as Spycraft should ever be exciting, fun or even remotely interesting ... which makes it that much more surprising that Spycraft is all of those things.

Activision's 1996 foray into the world of spygames is almost single-minded in its dedication to immersing players in the complexities of real-life espionage. Spycraft isn't about big setpiece moments, though it does have one or two of those. Instead, it's about the sensation of scouring through phone conversations for a single name, about using intellect, rather than firepower, to catch your prey, about spending 20 minutes going over a security photo with a digital magnifier until suddenly, wonderfully, you find the sniper's face reflected in a shop window.