Spycraft's gameplay consists primarily of minigame-esque simulations of actual (and, at the time, cutting-edge) CIA surveillance technology wrapped around story-driven logic puzzles. For example, after the Russian politician's assassination, you learn that the murder weapon was stolen from a secured CIA building by an employee named Dr. Cohlen. By browsing Cohlen's dossier, you discover that Cohlen suffers from a crippling case of claustrophobia. Then, by cross-referencing Cohen's activity log in the security system with the surveillance footage from the day the weapon was stolen, you find an inconsistency: Before stealing the weapon, Cohlen entered and exited a crowded elevator without even flinching. After magnifying the surveillance video, you find that the man who stole the weapon was an impostor - a poorly disguised spy by the name of Allen Wayne, whose prosthetic nose and makeup couldn't fool your photo analysis programs. With the thief's identity confirmed, you've got a new lead to follow. 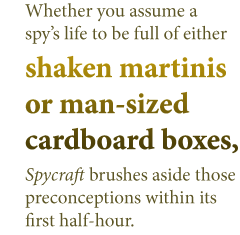 The game is composed almost entirely of these types of puzzles, but the experience never feels boring or disjointed. Perhaps that's because they're believable and make sense within the context of the mission. That's not to say the Cohlen puzzle is totally free of logical inconsistencies (how could Allen's disguise fool every single trained employee in the building but not a 1996 photo analyzation program?), but your short-term goals and immediate affordances are obvious, credible and clear. Unlike the plot-driven puzzles of most LucasArts adventure games, you always know exactly what you're trying to accomplish and which tools you must use in order to do so. Spycraft has zero interest in forcing you to juggle your inventory around simply to make things more difficult.

Which, come to think of it, is another reason Spycraft's puzzles are so effective: They don't fall into established videogame tropes. I'm tempted to call the Cohlen scene a minigame, but that does a disservice to the amount of mental work the sequence requires. It's not even a puzzle in the traditional sense; you don't rearrange colored blocks or employ game mechanics to produce a desired outcome. It's simply about analyzing the information in front of you and mentally connecting the dots.

To focus solely on the varied quality of Spycraft's puzzles, however, is to miss the bigger picture. Yes, their accessbility and unclassifiable nature make for enjoyable gameplay, but more importantly, their realistically low-key implementation makes you feel like a spy. Thanks to Colby and Kalugin's involvement, it's incredibly easy to imagine the things Thorn does throughout Spycraft's campaign are what real life spies have to deal with on a daily basis. Whether you assume a spy's life to be full of either shaken martinis or man-sized cardboard boxes, Spycraft brushes aside those preconceptions within its first half-hour.

All that realism comes back to bite you in the ass once the game tackles something which will, unlike most of Spycraft's gameplay, be familiar to modern gamers: moral choice. Just as the game's default desk-bound scenarios strive to provide you with a realistic, often unspectacular spy experience, the game's few pivotal player choices do not shy away from the moral ambiguity that the life of an actual spy presumably entails.

Letters to the Editor: The Spy Who Fragged Me The Escapist Staff 0 Comments