Take the ending, for instance: The Russian presidential candidate, you learn, was assassinated by a competing politican's campaign manager. By killing the candidate, his rival would be a shoo-in for the presidency; by subsequently assassinating the President of the United States, Russia would be allowed to keep all of its nukes that would have otherwise been signed away by the fictional END Treaty. After a brief showdown, you take care of all the guilty parties. The CIA mole is dead, and the campaign manager is in custody. Congratulations seem to be in order - except it's not that simple or pleasant. Nothing in Spycraft is. 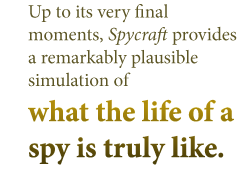 Following the arrest of his campaign manager, the rival candidate now supports the END Treaty. His competitors, on the other hand, do not. Yuri, a member of the Russian Foreign Intelligence Service who helped you throughout the game, will stop at nothing to see both the candidate and his campaign manager behind bars. But the CIA sees things differently. Regardless of the new candidate's culpability in the dozens of deaths that you've uncovered, he is the only person in Russia with the power to sign the END Treaty and, by so doing, significantly reduce Russia's nuclear stockpile. The CIA wants him alive and in charge.

And that means Yuri has to die.

At the end of Spycraft, you have one final choice to make: Do you shoot a law-abiding citizen who wants to see justice served? Or do you let him make the arrest, thereby getting yourself fired from the CIA and allowing Russia to increase its nuclear stockpile? Quite suddenly, in an experience otherwise full of desk-jockeying and logic puzzles, Spycraft drops an ethical quandary more compelling than anything in BioShock or inFamous. There is no clearly defined "good" or "bad" ending: In one, you are labeled a traitor and must watch in horror as the new Russian president declares martial law and cuts off all communication with the U.S.; in another, you are given a promotion and vacation time for murdering an innocent man.

Up to its very final moments, Spycraft provides a remarkably plausible simulation of what the life of a spy is truly like. Problems are solved not by grizzled heroes wielding rocket launchers, but by nerdy, morally questionable men hunched in front of computers. Though Spycraft may eschew the operatic thrills or visceral pleasures of the Metal Gear Solid or Splinter Cell series, it offers something far more unique: an honest, unflinching dedication to immersing players in the best and worst parts of being a spy.

I hesitate to call Spycraft the greatest spy game ever made - it's riddled with bugs and weighed down by mediocre FMV acting. Yet perhaps it has a higher distinction: In a genre otherwise filled with bipedal robots and world-ending computer viruses, Spycraft may, in fact, be the only spy game ever made.

Anthony Burch produces the web series Hey Ash, Whatcha Playin, writes about videogame-to-film adaptations at AMC and is the Features Editor for Destructoid.com.