Imagine discovering that a secret tribe of Neolithic cavemen used electricity long before it became a cornerstone of civilization. That's what playing Exile for the first time feels like today.

Released on the BBC Micro home computer in 1988, it crammed a sprawling open-world environment (along with digitized speech) onto a single side of audio cassette tape data. It also came bundled with a 20,000-word novella explaining the backstory. These were far from its only achievements: Along with the original Metroid for the NES, Exile was also one of the earliest examples of the "Metroidvania" genre; in fact, you can find many parallels between the designs of Exile and 1994's Super Metroid six years later. 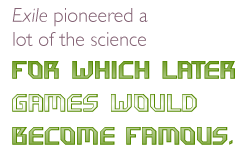 Sadly, this groundbreaking science-fiction adventure went mostly unnoticed outside of Europe. It was co-developed by Jeremy C. Smith and Peter Irvin, and while Smith sadly passed away in 1992 I was fortunate enough to speak with Irvin recently about the game's creation. He comments on its obscurity in the States: "To my knowledge, Exile was sold only in the U.K., Europe and Australia. It's a shame the C64, Amiga and Atari ST versions never got published in the U.S."

But Exile's legacy goes far beyond pioneering a nascent genre or cramming a ton of game into a tiny amount of disk space. More than anything else, it was a landmark title that featured realistic gravity, inertia and object mass years before players understood the concept of a physics engine. It also had an astounding level of AI, stealth-based gameplay, a logical ecosystem governing the world's creatures and a teleportation mechanic that feels startlingly like a predecessor to Portal. In short, Exile pioneered a lot of the science for which later games would become famous.

Few games take place in a believable environment where creatures exist for their own sake instead of solely to interact with players - but Exile is one of those games. In its world, native species have realistic (if simplistic) behavioral patterns and nesting territories. Yellow birds are harmless but will follow and annoy you, while wasps are aggressive and red monkeys fling what appears to be dung. But it's the way these creatures interact that makes the game so fascinating. Birds will eat wasps if led to their hive, protecting you and allowing you to collect any nearby items. Wasps can also be captured and fed to the monkeys, which return to their burrow and reward you with energy tanks. The Amiga update introduced even more varied wildlife, including a wonderful moment where you stumble across a pond containing tiny frogs that serve no gameplay-related purpose, existing solely to create a more believable world.