Irvin explains the naturalistic behaviour of Exile's wildlife: "All of the game's objects have properties defining what groups they're members of, how they move, what they fear or are attracted to, etc. Some objects modify the default functions of others, and it's surprising the sophisticated behavior this creates. Wasps are attracted to wasps, but occasionally one wasp becomes attracted to humans and the others follow as a swarm because they're still attracted to wasps." 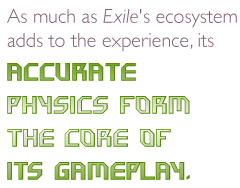 Realism and believability were a priority when creating Exile, and it shows in how creatures and enemies react to you, each other and the environment. "It was something we'd always wanted to do, striving for better realism, because Jeremy and I had a big interest in physics and maths," Irvin says. "Features were continually added, and it influenced the design: creatures using line of sight behavior and reacting to noises nearby, automated guns turrets taking into account gravity, mass related puzzles and so on."

The Laws of Motion

As much as Exile's ecosystem adds to the experience, its accurate physics form the core of its gameplay. Every object has its own mass, which in turn affects the objects it impacts. You have weapons which you can fire in a 180-degree semi-circle in front of you and a jetpack for unlimited flight. Flying, meanwhile, is affected by the mass of the objects you're carrying, and every input of kinetic energy plays out realistically, adhering to the laws of physics. Stored energy, measured in kilojoules and megajoules, also plays a big role: Both the game's weapons and the jetpack require it, and once it's depleted items only function intermittently. Your central energy reservoir, the jetpack, can be topped up by collecting energy tanks and, should any required item be running low, it's possible to transfer between items any remaining megajoules.

Tying in to Exile's physics are a series of teleporters and your own "personal transporter," which allows you at any time to record up to four positions and, at the press of a button, warp to the last one instantly. "The teleportation system was a means of getting around the huge map without having to physically fly along the tunnels," Irvin explains. "This also became the solution to the eternal problem of what to do if players died. Your protection suit detects that you are about to die and warps you to your last recorded position. This was influenced by Star Trek and the BBC space drama Blake's 7."

The personal transporter also allowed the creation of a multitude of mind-bendingly complex 2D puzzles that required clever thinking and quick reflexes. Perhaps the best example is in the Amiga version, where a harmless robot blocks a tunnel. You can record your position to the right of him, then lure him a few steps down the tunnel before warping to your recorded location which is now to his left. Many of Exile's other teleportation puzzles, however, are so complex that they defy explanation.