But as ambitious as Exile's design was, it was limited by the meager hardware of the time, and some of the team's best ideas, such as a deformable landscape, had to be dropped. "We spent an awful amount of time optimizing the physics and graphics engines to keep the speed up," Irvin says, "and there were many compromises, like having an impact system where objects didn't rotate but were aligned to the axes." 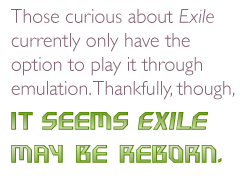 The original BBC version pushed the limits of the system so much that, by accident, Exile featured both today's design principles of recharging health and a HUD-less screen. There was no RAM left for an inventory or even health bar, Irvin explained, so when critically injured, your character flashes. Further damage results in transportation, and only over time do you heal. Pocketed items, meanwhile, have to be cycled through and displayed in your character's hands, and the remaining energy for weapons is conveyed through audio when selected (three blips meant 3 megajoules of energy remaining).

This lack of RAM also means that running the BBC original today is only for the brave: The save routine requires wiping the BBC's RAM in order to temporarily store potential save data, which worryingly also crashes the system. You then reboot the machine, pray it doesn't get lost and reload the program in order to access the start-up menu with "save" and "load" functions. The Amiga version resolves all of this, but still suffers from keyboard controls which require nearly 30 different combinations of inputs to play.

Those curious about Exile currently only have the option to play it through emulation. Thankfully, though, it seems Exile may be reborn: During my interview, I discovered that Irvin plans to release an update of the Amiga version for the iPhone. "A few years back, I was contracted to produce a private demo of Exile for a cell phone manufacturer," Irvin says. "Having the converted code, I thought it'd be a good idea to bring it to other platforms, hence the iPhone port. It's surprising how you can simplify a control system when you set your mind to it!" Due out later this year, it could be a huge release if Irvin can overcome the difficulties with the interface - meaning Exile won't remain as its name implies.