Despite the near daily advances made in science, the knowledge we have of the way our world works is staggeringly incomplete. We have only glimmers of the whole story, and even many of those are just good guesses. It sometimes seems as though science is nothing more than an elaborate guessing game. Studies and research don't prove anything, they merely make near approximations, hailed as the newest brick atop a foundation that will always be pretty shaky. 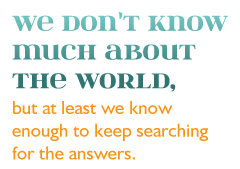 That's what works, though. Imagine if every discovery in science was treated as an irrefutable truth. We'd still think the Earth was flat, that we were the center planet in the Universe and that the laws of classical physics applied to everything, even subatomic particles. We'd have to shut our eyes toward a lot of inconsistencies, but at least we would have answers; flimsy as they may be.

Thankfully, scientists are a rather unruly bunch, never pleased with the status quo and always searching for a better, more robust answer to their questions. We don't know much about the world - that's true - but at least we know enough to keep searching for the answers. Below you'll find some of the oddest mysteries of science, things which don't quite make sense, yet are fascinating enough to deserve further investigation.

The Latin translation of the word placebo, "I shall please," seems more like a command than a translation. Placebos are sham medicines, but miraculously the sham has been proven to work. In a 2005 study, Dr. Fabrizio Benedetti of the University of Turin in Italy administered morphine to subjects in massive amounts of pain. On the final day of the experiment, he replaced the morphine with a saline solution. The subjects didn't notice a thing, even though the lack of morphine should have caused the subjects' pain to return. Here's the kicker: When Benedetti added naloxone, a drug that blocks the soothing effects of morphine, to the saline solution, the pain relieving effects of the placebo disappeared.

What does this mean? Well, no one really knows. It could mean that the mind can affect the body's biochemistry, producing hormones which can mimic the effects of whatever medication it's "emulating." In the case of the morphine placebo, it seems that the brain was "tricked" into producing its own analgesic compounds called opioids. Naloxone blocks the effects of these natural painkillers as effectively as it blocks the effects of morphine.