Snatch and switch a letter or two from "railgun" (just make sure you don't get shot while doing it) and you get "raygun," another gaming stalwart. While this concept is a little more esoteric than a railgun, it's a hugely popular weapon that has blasted its way through Command & Conquer, Doom, F.E.A.R, and Super Smash Bros. It delivers a beam of directed energy at a target, usually incinerating it, and it is sometimes known as a plasma gun. The difference? Well, your bog-standard raygun can only fire off a beam of electrically conductive laser-induced energy, whereas a plasma gun utilises a harmful stream of ionized matter. Simple, really. While actively destructive rayguns may be unrealistic for now, the ever-ambitious US Military has been hard at work on a riot-deterring device, which levels a beam of intense yet harmless heat at unlucky targets. It won't turn you into a pile of ashes and experience points just yet, but you really don't want to bask in its blaze either. 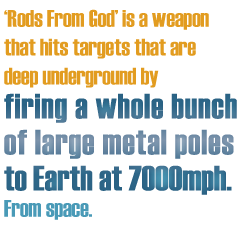 What about the big boys? The ultra-weapons that get called in when your hands get too quivery or fingerless to operate a handheld device? Gears Of War officially swooped up the Coolest Weapon Name Award with the Hammer Of Dawn - an absolute bastard of a weapon that rains down Imulsion-powered satellite beams onto helpless troops. There's no way a weapon like this could be remotely feasible on this plane of existence, right? Wrong. While lacking the red-hot power-beam, the US Military has been beavering away on a similarly hefty satellite-controlled weapon called 'Rods From God.' It essentially hits targets and bases that are deep underground by firing a whole bunch of large metal poles to Earth at 7000mph. From space. Those protective bunkers aren't safe anymore, kids.

It seems like stopping a Rod From God - which is a horribly phallic name when you think about it - would be nigh-impossible. That is, unless you had a force field. While the concept of an invisible shield of force blocking projectiles has long being a sci-fi/gaming staple, it has been treated with the most innovation in the Halo franchise. Not only did Master Chief have his own rechargeable shield, but the Bubble Shield saved many a life in multiplayer matches. It acts as a temporary force field against bullets, explosions, lasers, flames, grenades and other conventional weaponry, before disappearing after roughly 20 seconds of use.

Such a force field would come in quite handy in real-life. While not technically a shield, the Trophy System blocks incoming missiles from blowing up tanks. Designed by Israel, it uses 'top-secret' technology to stop projectiles and missiles from striking their intended target. What is that top-secret technology? Well, the powers-that-be are a little reticent to reveal exact details, other than that Trophy uses a radar system to detect those pesky missiles before taking counter-measures (what looks to be a retaliatory burst of ammo) to render it useless. The missile may still hit your precious tank, but, rest assured, by that stage it's simply a harmless metal cylinder. It might not have the cool shimmering texture that Master Chief's sports, but it's certainly proof that the technology of the United Nations Space Command is not entirely the work of fiction.