2K's BioShock introduced plasmid serums which gave the player numerous powers, one of which was the ability to whip enemies into a furious rage and force them to attack each other. While the delivery mechanism might differ, the notion of meddling with an enemy's mood and desires is certainly both powerful and possible. Unlike inducing rage in BioShock, there were designs to create different kind of response - wild, orgiastic, sexual desire. Ladies and gentleman: the gay bomb. 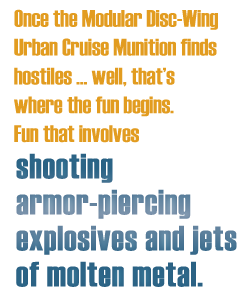 The devastating weapon was dreamt up by the US Air Force Wright Laboratory in 1994. The proposal was to introduce pheromones over enemy forces in order to make them sexually attracted to each other. Other non-lethal ideas cooked up by these enterprising chaps included a "flatulence bomb" and a "halitosis bomb," as well as a chemical which would induce wasp or rat attacks. While the subject of much mirth (and rejected for further development in this case) the proposals nevertheless imply that the technology is at least possible - and that the emotive theatrics of Rapture may soon be happening outside of fantastical underwater cities.

Of course, even with all these marvellous combat options it still makes sense to take humans out of the equation altogether. Why send inconveniently fragile flesh-and-blood troops into combat when you could just deploy robotic cannon-fodder instead? Best to avoid the shit-talking turrets from Portal, but the noisy propeller-whirled blighters so intent on ruining your day in both Half-Life 2 and the aforementioned BioShock might work. Look no further than the Modular Disc-Wing Urban Cruise Munition, a creation which developer Triton Systems claims will "provide revolutionary tactical access and lethality against hostiles hiding in upper story locations and/or defiladed behind obstacles." Once they find these hostiles ... well, that's where the fun begins. Fun that involves shooting armor-piercing explosives and jets of molten metal. It's a pretty sprightly device for something that looks a Frisbee.

If any of these sound incredible or unbelievable, it's worth noting that the weapons here are all either protoyped or technically feasible, yet momentarily impractical. Technology will always evolve in amazing directions, and sometimes what it produces will appear far-fetched or even magical. The same is true in videogames. Imagine trying to describe Left 4 Dead's "Director" or Grand Theft Auto IV's weather system to a 1981 Atari gamer - just as futile as laying out the pros and cons of the CZ 805 BREN A1 assault rifle to a Civil War-era rifleman.

Videogames will always be at the forefront of the imagination but it's going to be a long time before anything that can be dreamed by a game designer can be made in our world. Yet as the imaginations of H.G. Wells, William Gibson and Philip K. Dick have all been credited for their remarkable foresight in how technology would advance, you can expect gaming to have significant contributions predicting the next breakthroughs going forward. Some might say that it's a shame that those breakthroughs are most evident in weaponry, but then again force fields, plasmids and death-dealing Frisbees are undeniably cool.

C J Davies is a television writer and journalist presently based in London. He can be found over at www.cjdavies.com.