Not content to break isolated events or kill individual characters, the brothers discovered that they could manipulate the entire game storyline. "With Ultima 9, the techniques we developed gave us an answer for practically any situation and we essentially had the game wrapped around our fingers. I remember Ian poring over the cloth-map, trying to figure out how to do the maximum amount of damage [to the game's story]. I wanted to try and complete the game in reverse order, out of sheer spite." Having found ways to break everything, the brothers began to put the pieces back together in new and unusual ways. Ultima 8 became the story of "How to be a complete bastard in Pagan," and System Shock became "The Hacker's Guide to Sin." This involved finding ways to complete the games while skipping over important events, bypassing critical locations, and generally getting away with as much misbehavior as the games would allow. 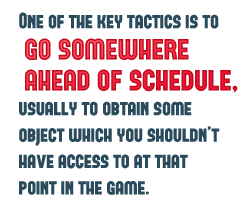 Of course, every good story needs a memorable protagonist, and JPM has created his share of interesting personalities. "One of my earliest memories [of Ultima 6] was creating a character named after my art teacher, running around the castle, stealing everything that wasn't nailed down and trying to get him high by consuming every available potion at once. It left him invisible with a glowing outline and able to see through walls." The details changed from game to game, but the characters are all delightfully quirky. His System Shock playthroughs featured "Mr. Gibbon" in reference to his outrageous ability to activate switches from impossible distance away, or sometimes "PNP Man" who was able to upgrade his abilities by plugging expansion cards directly into his brain.

An interesting character can make any walkthrough, or anti-walkthrough, into a more entertaining experience. However, the single most important step in creating an anti-walkthrough is finding the right game. "Generally the best approach is with a single, massive world like Morrowind or most of the Ultimas. One of the key tactics is to go somewhere ahead of schedule, usually to obtain some object which you shouldn't have access to at that point in the game. For example, in Morrowind, if you know what you're doing, it's possible to go straight to the area where the endgame takes place. It has been completed in just over 7 minutes by doing that."

Even though open-world roleplaying games seem like a natural fit, each game is different and they each have their own ways of handling story events. JPM uses the example of a typical fetch-and-retrieve quest. "The fishing quest is a classic example of this - a fisherman asks you to bring him scales from ten fish of a particular breed. In something like Ultima 7 - or indeed, Morrowind - you could come along, kill and scale all the fish, and THEN start the quest, completing it instantly. In Oblivion, the fish don't actually exist at all until you start the quest, and then it creates one single fish. You kill it, [the game] creates the second fish and so on." Some games are more linear than they initially seem, and it takes some experimentation to figure out what each game will allow.