Because every game is different, the success or failure of an anti-walkthrough isn't always obvious from the start. Creating one requires a combination of persistence, creativity, and luck. "With Serpent Isle, a lot of it was sheer chance. Even when we had the basics down, there were a lot of very sticky problems, and at one point I was sure we'd have to use the cheatmode to recover from it. A lot of these problems solved themselves through sheer luck or perversity. Getting out of the mountains, for example. There's no way I could have planned that - building a tower out of dried fish and people we'd murdered and walking across the sky to a hole in the cave roof that shouldn't even exist, just... just happened." Unfortunately, not all games make for a successful anti-walkthrough. JPM once tried to generate one for Return to Castle Wolfenstein. "Some of it is quite amusing, but there just isn't really enough material. After the first couple of missions it kind of dries up - or perhaps I get too involved in the game itself and stop looking for holes. Difficult to say." 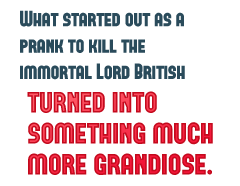 Anti-walkthroughs take effort and planning, and putting one together takes time, sometimes years. "I don't usually do them all in a single go, often they get started, left for a bit and picked up later. I like to leave them a couple of years so I can forget the key details before I replay them later, that helps keep them fresh. As a rule, the older the game, the more times I've played it." Over the years, JPM has developed a standard set of tools he employs. Well, sort of. Piecing together an anti-walkthrough is as much an art as it is a science. "It's not like I have a checklist. The usual thing is to start thinking about it after you've played the game through to completion. Then you know how the game is supposed to work, what happens and in what order - so you can think about forcing things to happen in the wrong order. So yes, sequence-breaking is the usual technique. However, killing NPCs can also be useful. In many situations you're supposed to do a whole load of quests in order for someone to give you the key or whatever - it's worth checking if you can just bash them over the head and steal it."

It's usually possible to find small ways to break any game, but anti-walkthroughs are a set of tricks that form a complete story - one that the designers never intended. JPM and his brother discovered this long ago, and what started out as a prank to kill the immortal Lord British turned into something much more grandiose. Even though not every game makes for a successful anti-walkthrough, a little bit of experimentation can still create some memorable characters and misadventures. In the end, even bug-filled games can provide amazing amounts of entertainment value if you're willing to defy the rules and attempt the impossible.

Alan Au is a freelance writer, academic, and games industry advocate. When he isn't busy abusing scripted event triggers, he spends his time exploring the connection between games, education, and health.