Lord British is a jerk. First, he hassles you with obscure copy-protection questions, then he doesn't even have the decency to die properly. At least, that's how it was supposed to work, but Joseph Paul Morris (JPM) had other plans for the nigh-immortal ruler of Britannia. Together with his brother, JPM found new and creative ways to exploit the rules of Ultima and do things that shouldn't even be possible. Along the way, he discovered that entire walkthroughs could be built around his misadventures in computer roleplaying games, breathing new life into old games and creating new stories which the designers never intended. 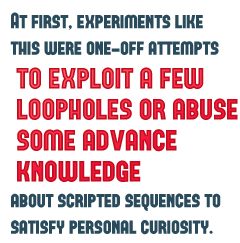 JPM was 14 when he discovered Ultima 6, and it was unlike anything he had ever seen before. "The world was huge and more importantly, you were not particularly constrained as to how you approached it. If you wanted to break into the Royal Mint or massacre an entire town, the game was perfectly happy with that." For JPM and his brother Ian, roleplaying games offered an opportunity to try different things without worrying about real-world restrictions, and Ultima 6 kept the pair occupied for years. After completing the game several times, the two began to experiment. "When we had tapped out most of playing the game normally, we began to try and do other things with it, to keep it fresh, I suppose. A lot of effort went into killing Lord British, precisely because he was supposed to be immortal, and that's really what kicked it all off, I suppose - doing the impossible."

As it turns out, not everything is as impossible as it seems, and there's a long and storied tradition of trying to assassinate Lord British. JPM's solution was simple and elegant. When asleep, the normally immortal Lord British was replaced by a "sleeping" representation, subject to the same damage rules as everyone else. The trick was to kill him before he could wake up. Fortunately JPM found the right tool for the job, a single-use "glass sword" that killed whatever it hit.

If an unkillable character could be killed, then what else was possible? For example, if you knew when and where an enemy was going to appear on the map, could you arrange a welcoming gift? JPM remembers one such discovery while playing System Shock. "Edward Diego turns up by the escape pods and tries to kill you. This only happens while you're actually trying to escape the station, though there are plenty of opportunities to visit beforehand, so I made a nice little pile of explosives topped with a live proximity mine. It worked perfectly - as soon as the elevator arrived on that floor, there was a flash and a distant thump as he appeared, exploded and then disappeared again."