When it comes to games that are "almost great," the one I keep coming back to is Alone in the Dark, the 2008 addition to the long-standing horror adventure series. That's odd, because at first glance I found it extremely hard to describe as "almost good" - in fact, that statement would make the world's least sensitive lie detector hurl itself out the nearest window. Alone in the Dark is one of the few games I can think of that fails at every turn. It's like Sideshow Bob in that one episode of The Simpsons, getting pounded in the face by a rake every time he takes a step in a new direction. 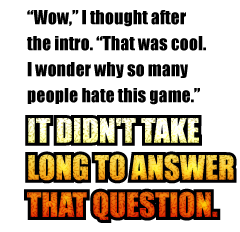 So why do I have this strange affection for a game that did nothing but shoot itself in the foot with gasoline-soaked bullets? Well, it was certainly innovative. Rabidly innovative, even. Almost all of its gameplay mechanics tried something new and experimental. Every single one of them is broken in some horrendous way, but each one had the potential to succeed. And that's why it embodies "almost great" in my mind. It's a gigantic mess, because it's a bunch of almost great ideas strung together. Allow me to explain ...

Alone in the Dark has a very effective opening. You wake up groggy and bleary-eyed, and you have to blink with the R3 button in order to make out your surroundings, which I still think is one of the most interesting uses of that button in gaming. Meanwhile, a bunch of strange men threaten you with guns and talk about stuff you don't understand before some mysterious demonic force starts tearing the building apart. Your escort is apparently eaten by the plastering, and you're left to stumble, disoriented and blind, through the building's maintenance tunnels until you come across a mirror and see ... a stranger. With a big fat seam in his face.

"Wow," I thought after the intro. "That was cool. I wonder why so many people hate this game."

Unfortunately: It didn't take long to answer that question. A story is only as good as its pacing, and when you're getting a rake in the face at every turn from physics glitches, stupid grind quests and good-old-fashioned cheap deaths, it's hard to keep caring about the fate of Mr. Seamy Face, especially when the plot turns out to be about Lucifer rising to destroy the world. Why can't Lucifer ever rise for some other reason, like to check on his stock portfolio?

Gallery of the Day: 8 Video Game Movies You Can Safely Avoid ffronw 29 Comments