These chemicals might just sound like a novel story set-up, but they're absolutely key to what makes the game itself so intoxicating. Outcry makes it abundantly clear from the start that it's going to be placing a lot of emphasis on its visuals. There's a film grain layered over the entire screen, the outer reaches of your vision obscured by darkened and blurred bars, the lighting pulsating ad nauseum. But when you create a sample of the mind-altering substance for yourself, the minute you plug yourself into this worrying cylinder of metal, and the moment those chemicals begin to circulate around your bloodstream while the machine circulates infrasound waves around itself, everything you see heads into the realm of creative madness. 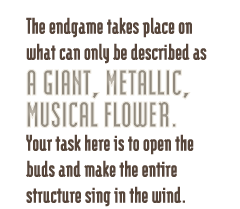 I can only imagine that working at development studio Phantomery Interactive must have been an intriguing affair. That's because I can only imagine they must have taken a rather substantial number of mind-altering drugs themselves. Outcry's flair totally nails the otherworldly visual creeping that defines those real-world psychedelics. Not that I've ever taken any, of course. And even if I had, I definitely wouldn't have inhaled and/or swallowed.

In the isolation chamber, your vision blurs, and you pass out. When you come to, things are much the same as they were before. Did it even work? You head back out into the room, and glance around. Your surroundings have taken on a slightly blue tint. And then you wander through the door, out into the hallway, except it's no longer a hallway, and is instead some sort of alternate dimension that appears to have been drawn inside of M.C. Escher's head.

From here, the plot spirals. You construct a key that allows you to travel back and forth through time. You dart perilously between the past and the present, collecting conveniently placed notes and using your newfound ability to move walkways and clear obstructions.

The architecture is inexplicable. It stretches out and contorts in the most impossible of manners. You're increasingly away with the fairies, surely. There can be no other explanation. The drugs are in full effect.

Only, apparently, the drugs hadn't fully kicked in until just now, because suddenly you're out in the middle of the desert. Heat waves rise from the sand and blur your vision as you make your way towards a dilapidated and abandoned town, a depowered tram parked in the middle of the square. It takes a few minutes before you realize those heat waves aren't heat waves at all: they're a symptom of your own wavering, breathing intoxication. Glance upwards and you'll see power cables disobeying the laws of gravity, spiraling and stretching up into the sky. It's just magnificent.

Once you finally get the tram working it's on to the endgame, which takes place on what can only be described as a giant, metallic, musical flower. Your task here is to open the buds and make the entire structure sing in the wind. Its melodies are haunting. Your field of vision changes again, this time becoming blotched with offset reds and greens. The psychedelia is in full swing. It's some of the most fabulous and evocative art design I've ever seen in a game.

And that's almost enough to carry it. Almost. Outcry's artistry is endlessly brilliant, and the early intricacy of its plot is a delight - even cutting through the convoluted storytelling methods. The hideous, misguided puzzles are - to begin with, at least - a distraction rather than a disaster. They aren't at all strong, certainly, but they're manageable.