If there was ever a game that exemplified the term "flawed masterpiece," it's Vampire: The Masquerade - Bloodlines, a 2004 PC title that aimed high and very nearly made it. 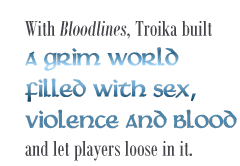 Based on White Wolf's tabletop RPG, Bloodlines was developed by the now-defunct Troika Games, a studio founded by former Fallout designers with a reputation for having wonderful ideas that they were never fully able to execute. With Bloodlines, Troika built a grim world filled with sex, violence and blood and let players loose in it, their own little slice of Armageddon to play in. But for all of Troika's good intentions, its mixed reputation was well deserved. Many of the wonderful ideas in Bloodlines were weighed down by a plethora of flaws, and while no single flaw ruined the game, they collectively held it back from realizing its true potential.

In Bloodlines, you play a new vampire whose illicit creation breaks vampire law and thrusts you into the heart of vampire politics. As the tale unfolds, your role became increasingly pivotal when tensions between rival factions come to a head over an ancient sarcophagus believed to hold the slumbering form of an ancient vampire. Where the game shined brightest, however, were its varied side-quests, which ranged from tackling the Russian Mafia in exchange for a stake in a club to dealing with a vampire-hunter posing as a erotic dancer and, in one instance - and this isn't a joke - fighting a wereshark. These quests often had multiple parts, sometimes spanning the entire game, and they changed depending on which faction gave you the task.

Bloodlines was unparalleled in letting players define how they handled the challenges the game threw at them, but it was clear that some options benefited from more of the developers' time and attention than others. It was possible, for example, to complete much of the game using only its dialogue options, and the characters actually had interesting and unique personalities rather than just serving as ciphers that handed out quests. The smarmy Sebastian LaCroix, nominally in charge of Los Angeles' vampires, rubbed shoulder with the monstrous information broker Bertram Tung, the beautiful but crazy Voerman sisters, owners of the Asylum Club, the irreverent and itinerant Smiling Jack and more besides. The cast list for Bloodlines reads like a Who's Who of voice acting, and the game featured sterling performances, excellent writing and wonderfully expressive facial animations that put many modern titles to shame.

The Tragedy of Alone in the Dark Yahtzee Croshaw 72 Comments