In the long, scorching, cabin-feverish summer of 2009, a single thing kept my sanity afloat. At night, when the tarmac had cooled and the commuters had subsided, I went running. Not the Nike ideal of running - no tight shorts and trainers, no pumping the London streets with adrenaline-fueled fury. Instead, I loaded up the free-running masterpiece Mirror's Edge, and dove in. Night after night, visions of the game's clean and bright cityscape blotted out the day's loneliness, depression and insecurity. I found freedom in the space, the air, the momentum. But there is one aspect of my sanctuary I refused to consider in detail until now: Mirror's Edge failed. 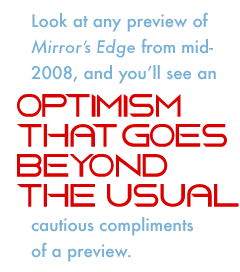 Mirror's Edge is an impossible game. Its publisher, Electronic Arts, is one of the largest in the world, reviled by many gamers for its love of repetition and safe bets. Its developer, DICE, is a one-trick pony, an experienced developer of large-scale multiplayer shooters. And what game do these two organizations come together to produce? A risky, innovative platformer-cum-shooter with an emphasis on the avoidance of combat rather than the reverse. It's a paradox, but a beautiful one nonetheless. Look at any preview of Mirror's Edge from mid-2008, and you'll see an optimism that goes beyond the usual cautious compliments of a preview. There was a genuine excitement about how powerful it looked, how original and bold.

This largely translated into the way it played. Mirror's Edge is fresh in every sense of the word, a platformer with an emphasis on movement and momentum, inspired by the athletic ballet of parkour, where runners use agility and speed to overcome physical obstacles. That means daring rooftop leaps, scaling construction sites and an elegant bounce to every move. The game's story and setting, while important, are ultimately secondary to the experience it offers: It shirks the more traditional third-person viewpoint and instead puts you in the eyes of the protagonist, so that you felt every bodyslam, tumble and fall.

The city that you sprint across is a surreal vision of the future, with architecture by Mondrian and society by Orwell. "Stark" is the watchword throughout - stark, but not bleak. The environment was designed with intentional bursts of color, but the palette has pure white at its core, and the UI follows this minimalist tendency as well - there isn't really one. A single dot sits in the middle of the screen to orient you while you're running, leaping and rolling through the city; besides that the screen is filled only with your motion. There is a singular vision at work here, and it's worn proudly on the game's chest.