These complaints are akin to some of those lodged against Microsoft in the last 12 years. Anyone who has ever used Windows knows Microsoft has long included a suite of products with its operating systems, the most infamous of which is Internet Explorer. Competitors such as Netscape argued that by including such software with each copy of Windows, Microsoft created a platform on which it was incredibly difficult for Netscape's own browser to maintain a foothold. At the time of the first anti-trust lawsuits in the late 1990s, Windows did not allow users to uninstall Internet Explorer, and it was difficult for users to designate third-party products as their default browsers. While Microsoft was able to settle their case in the United States, the company has been ordered to pay massive fines by governments such as the European Union. 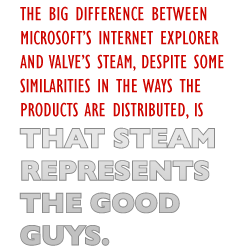 Steam's tight integration with Steamworks is uncomfortably similar. Steamworks installs Steam automatically, even if the user isn't interested in Steam or the user purchased the game through some other digital distribution service. And unlike Internet Explorer, there is no way for the user to opt out of using Steam. Install Steam or don't play the game - those are the only choices. This kind of limitation on the use of a product is extremely anti-competitive and is sure to cause continued tussles between Steam and its rivals.

While the Microsoft example is an apt way of examining how Steamworks can be anti-competitive, it has a glaring flaw: Intent.

Microsoft earned the nickname of the "Evil Empire" because it was ruthless in how it went about hobbling competitors. There was a long list of companies, industry experts and consumers with a score to settle, making Microsoft an easy target. Steam's users, however, seem to love the service, and the game developer which owns it is arguably one of the most capable in the business today. In other words, the big difference between Microsoft's Internet Explorer and Valve's Steam, despite some similarities in the ways the products are distributed, is that Steam represents the good guys.

Ill intent, however, is not the only mark of a monopoly. Intel provides the perfect example. While the Microsoft monopoly has fostered no small amount of distrust and scorn for the Windows operating system, it is hard to find such dislike for Intel. Intel's products have been leaders in the computer processor industry for most of the company's history. As Intel has pointed out in its responses to various anti-trust suits across the globe, today's processors are massively faster than those built two decades ago and yet also cheaper than ever before.