But in spite of this, Intel has already lost anti-trust lawsuits in the European Union and South Korea. The company also complied with an order to discontinue anti-competitive practices in Japan rather than face a threatened fine. Intel faced these problems because, despite the fact that it has no real intent to harm consumers and doesn't (at least publicly) appear to harbor Microsoft's perverse desire to demolish all competition, the company's actions were anti-competitive. Intel entered into rebate agreements with PC vendors which were based on volume. Because of this, AMD had a hard time selling large volumes of processors even when their processors were better, because it was more profitable for companies like Dell to continue selling Intel processors and take advantage of Intel's discounts. Leader in it's field or not, Intel was still slapped with lawsuits because of this behavior. Having a clean public image may help a company's bottom line, but it can only keep governments from poking their noses around for so long.

The Road to Hell 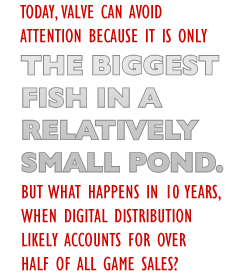 The case of Intel shows us that monopolies in large markets inevitably attract attention even if the offending companies cultivate a good reputation, and this will be a hazard for Steam in the future. The best estimates are that Steam already has 70 percent of the digital distribution market - only 10 percent shy of Intel's day-to-day market share in the computer processor market. Worse, there is every reason to believe Valve's momentum will turn a snowball into an avalanche. As more games use Steamworks, more gamers will have to use Steam. And as Steam's active user base grows, it will become harder and harder for developers and publishers to opt out of the platform - and so on.

This is good news for Valve's bottom line, but Steam's growing size could force the company to become more accountable for its actions. In another example from the Intel case, AMD complained that it could not even give away processors because Intel's rebates had afforded Intel a stranglehold on the market. The idea of "giving away" processors is itself rather anti-competitive, but no one slapped AMD with a lawsuit because the company was simply too small to attract scrutiny.

Valve hasn't yet taken the accusations that Steam is an infant monopoly seriously. Jason Holtman, Valve's Director of Business Development, responded to such criticism by ignoring it, saying, "If we started doing things that were bad decisions for customers or developers, they can just move and go somewhere else." But Valve needs to wise up. The company's intentions are not in doubt, but if they don't accept that their software is crippling their competitors, they could be in for a rude - and costly - awakening.

M.S. Smith is a freelance writer in Portland, Oregon. He writes under the business name of Digital Ink Writing and operates a technology blog called SmidgenPC.

Is Now a Good Time to Play MechWarrior Online? Slycne 11 Comments
Comments on