Steve Huijboom defeats a level boss and quickly turns his chair to face a nearby computer to make a note. "When you shoot, you'll see green 'goo' indicating that you're hurting the boss" he writes. "When it's in the air, don't waste too much ammo; rather, just burst at it until he gets back down and repeat the process." 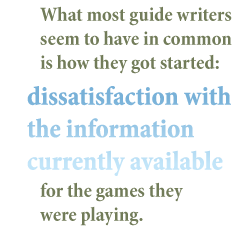 It's March 5, 2009, and Huijboom is playing through Resident Evil 5. The game isn't set to be released in most of the world for another week, but Huijboom had pre-ordered the Japanese version with the highest shipping priority.

This isn't the way most gamers play through games, but then the 22-year-old psychology and philosophy student in the Netherlands isn't the average gamer. He's carefully working his way through the game and taking meticulous notes in order to write a finished walkthrough before most people have even placed the disc in their console. Huijboom is one of the thousands of gamers who spend extra time documenting their first play through a game to create guides, walkthroughs or FAQs and post the results online for free.

Many gamers have probably encountered a scenario that leads them to consult a guide - a boss battle that just seems impossible, a puzzle section that looks incomprehensible or simply a situation with no indication of what to do next. Thanks to the efforts of people like Hujiboom, the Internet has vast repositories of detailed guides that lay out instructions on where to go, what hidden dangers exist, where to find the key and what the bad guys' weak points are. A good guide usually includes maps, charts and diagrams, often drawn using nothing but ASCII text. Along with instructions, there's frequently a fair bit of humor and tidbits of trivia included. It's a style of writing that technology journalist Clive Thompson once described as "travel literature of the damned."

While game guide writers come from a variety of places and backgrounds, what most seem to have in common is how they got started: dissatisfaction with the information currently available for the games they were playing.

Daniel Engel, a 27-year-old from southern Ontario, started writing game guides after playing Equinox for the SNES. Not finding much information on how to get through the game, he decided to start writing out what he already knew to try and gain some clarity and insight into how the game worked. "It was good to collect my thoughts and work my way through it," he says. "It helped me get through the game, so I shared it with everyone else." Engle has kept at it: To date has written and shared more than 100 guides.

For Huijboom, part of the motivation to write guides comes from being unhappy with the quality of "official licensed" guides, particularly for a fairly linear game like RE:5. "I don't think it warrants a purchase of a $20 guide," he says. Meanwhile, other games have puzzles so insanely complex that you could be forgiven for thinking they were created specifically to sell strategy guides. ("Wait, that creepy poem about mutilating someone's face was actually the order to push buttons on a keypad?!")