Bravo's analogy is not an isolated occurrence. Joe Rogan, a commentator for the UFC, once wanted to help viewers understand the force and effectiveness of a leg kick. But instead of referencing how much pain a leg kick causes or a muscle's reaction to blunt-force trauma, Rogan said "Think of leg kicks as like in a videogame. The more they take, their power goes right down." 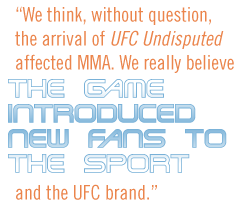 For a generation raised on Street Fighter and Mortal Kombat, the connection is a simple and logical one. For many people, videogames are their only means of experiencing martial arts. That can certainly be said of fans of the UFC and mixed martial arts (MMA): They may not be eager to jump into the cage, but they will gladly pick up a controller. With IGN reporting last month that THQ's UFC 2009 Undisputed had sold over 3.5 million copies since May of 2009, it's safe to assume that millions of people have experienced MMA through videogames.

"We think, without question, the arrival of UFC Undisputed affected MMA. We really believe the game introduced new fans to the sport and the UFC brand," UFC Undisputed Producer Neven Dravinski and Senior Designer Omar Kendall said in a joint email interview. "One of the coolest things about the game is that we're literally teaching people the principles of MMA. To be good at the game, players utilize the same principles as fighters in the Octagon.

"We see people commenting all the time that they may not watch UFC on TV but love the game," Dravinski and Kendall continued. "To us, that speaks volumes about what we've been able to do with this game, this brand as well as this sport. Whether they know it or not, they already have a heightened awareness of the sport of MMA and the brand of the UFC. "

Martial arts have had a profound effect on videogames. Videogames, in turn, have had an undeniable effect on martial arts. As Koepfer suggests, the ultimate hope for martial arts enthusiasts is that playing a fighter in a videogame will inspire some to try martial arts for real. Dravinski and Kendall knew of at least one example.

"One of UFC Undisputed 2010's fighters, [Patrick Barry], was recently asked who his heroes were. His first answer was his mother, his second answer was Mike Tyson and his third answer was Sagat. Now this very same fighter gets the chance to be a videogame character himself. I hope his appearance in UFC Undisputed 2010 has as much meaning for him as it does for me: to come full circle from real-world fighters to videogame fighters and back again."

Marshal Carper is the Editor-in-Chief of Lockflow.com. His book, The Cauliflower Chronicles: A Grappler's Tale of Self-Discovery and Island Living, will be on shelves this summer.