Blizzard's landmark 1998 RTS is one of the most successful games of all time judging from the number of copies sold - a hefty 11 million units - but its influence extends far beyond mere numbers on paper. StarCraft defined the RTS genre - and for many, PC gaming as a whole - for years after its release. To this day, it remains one of the most intensely beloved and highly-acclaimed games of all time. So when Blizzard announced a sequel in 2007, many of the game's fans, whether casual or diehard, were skeptical. How could any sequel possibly live up to the original? 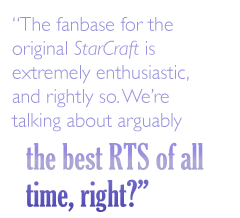 It was Dustin Browder's job to answer that question.

When Browder joined Blizzard in 2005 as the Lead Designer on StarCraft II, he was hardly a newbie to RTS design - he'd previously led the charge on games like Command & Conquer: Red Alert 2 and The Lord of the Rings: The Battle for Middle-Earth - but that didn't necessarily mean he was prepared for the task ahead of him. It was more than merely overwhelming. "Let's call it 'terrifying' - that'd be much more accurate," laughs Browder. "The fanbase for the original StarCraft is extremely enthusiastic, and rightly so. We're talking about arguably the best RTS of all time, right? You can just sense the enthusiasm for this product."

Browder wasn't a part of the team that developed the original StarCraft, but he identifies himself as an ardent player and fan who played the game "for many, many years," and who, as a designer, tried to apply "many of [StarCraft's] design sensibilities" to his own games. However, that did little to make the job of building a sequel any less daunting.

By the time he joined the team, part of the work had already been finished. The game's engine had been under development for several years - the team even had a working recreation of the original StarCraft to test it out - and Blizzard's VP of Game Design, Rob Pardo, had already set the vision for the sequel: "Hearken to the legacy of the original, build on the huge success of [its] multiplayer, expand on Battle.net and do something completely fresh and new for the series with the solo campaign," recounts Browder. "Those were the goals set for the project before I got there, so the rest of the time we were grinding away at them."

Of course, having the vision in place doesn't necessarily make executing it any easier. What, exactly, does it mean to "hearken" back to the original title? What makes StarCraft, StarCraft?